Sister Consilio Fitzgerald has dedicated her life to helping people overcome addiction problems, and in so doing has influenced the lives of thousands of addicts and their families. She is most famous for establishing Cuan Mhuire, the innovative centres that build and sustain the personal spirit of the individual to help them overcome their addictions.

Born on the Cork/Kerry border, Sister Consilio trained as a nurse and entered the Order of the Sisters of Mercy in Athy, Co. Kildare. It was while working as a nurse at St. Vincent's Hospital, Athy in the early 1960s that she witnessed the impact of alcohol addiction. Her response to this came in 1966 when she founded Cuan Mhuire. Two years later she opened the first day centre at the Convent of Mercy in Athy and since then she has added centres at Bruree, Co Limerick, Newry, Co. Down and Turloughmore, Co. Galway, as well as a transition house at Gardners Street, Dublin.

Sister Consilio has also pioneered other initiatives to help the community, including the founding of a special treatment centre for young adults and a boxing and athletics club for the local youth at the Cuan Mhuire centre in Newry. She has also been instrumental in the developing of counselling and treatment skills by founding the Galilee House of Study for the training of addiction counsellors.

Sister Consilio provides a shining example to everyone of how the belief in the value of a person can be translated into society's gain. Many awards and accolades have acknowledged the inspiration she has generated. She has been voted Person of the Year, awarded an Honorary Fellowship of the Royal College of Surgeons and been the subject of a number of documentaries and books.

The award of Honorary Fellowship of Waterford Institute of Technology is a fitting recognition of Sister Consilio's dedication to improving the life of others. 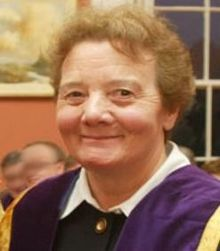