Southeast citizens get their say on Brexit at topical public meeting

Waterford citizens gather to have their say at Brexit, Ireland and The Future of the EU – Moving beyond Brexit public meeting held at WIT

More than 100 people of all ages from Leaving Cert students to senior citizens gathered in Waterford Institute of Technology (WIT) on Friday, 23 November to discuss Ireland and the EU – Moving beyond Brexit at a public meeting organised by Europe Direct Waterford in partnership with WIT, The European Commission Representation in Ireland and the European Movement Ireland.

The audience listened to a panel of key players and experts; Gerry Kiely, Head of EU Commission Representation in Ireland, Deirdre Clune, MEP, Dr. Mary C. Murphy, Lecturer in Politics in University College Cork (UCC) and Gerard Arthurs, Lecturer in International Relations and Politics at WIT outline what Brexit will mean for Ireland and Europe.

In his opening address Gerry Kiely, Head of the European Commission Representation in Ireland, said "Brexit will have an impact on all countries in Europe, but none more so than Ireland. In addressing these challenges, the European Commission has been very clear. We stand full square behind Ireland, including with regard to the absolute necessity of avoiding the return of a hard border on the island of Ireland."

Speaking next and giving the view from Brussels, Deirdre Clune, MEP for Ireland South, said “the draft Withdrawal Agreement agreed by EU and UK negotiators and backed by the UK Cabinet last week is a significant step forward in the Brexit process. Even with the best possible agreement, it is still the case that the UK is leaving the EU and this will bring change. It is important that Ireland is ready for that change, for our citizens and our businesses. We will continue our preparations for all scenarios.”

She added, “EU and UK negotiators have worked really hard to get to this point. We are particularly grateful to Michel Barnier and his team. However, there is still a lot of work to do. Having a withdrawal agreement in place is essential to avoid the UK crashing out of the EU at the end of next March. We hope that we can now look ahead towards the future relationship and focus on the considerable work that is required in agreeing it.”

Waterford native Mary C. Murphy, a Lecturer in Politics, UCC who was delighted to speak to an audience in her home city outlined some of the challenges ahead for both Ireland and the EU: “The UK decision to leave the EU has resulted in profound political and economic challenges which will continue to impact on Ireland for many years to come. There will also be new and similarly challenging times ahead as the EU adjusts to life without the UK and sets course on a future informed by new policy priorities and altered political landscapes. Ireland and its citizens will be asked to contribute to discussions and dialogues about Eurozone reform, security policy, the EU's budgetary framework and other issues, all of which will shape Ireland's future EU membership after Brexit.”

The discussion was ably moderated by Rory Harte of The European Movement who invited the audience to share their ideas, concerns and expectations on the topics at this pivotal time while history is unfolding. The engaged audience put a variety of questions to the panel on a wide range of topics including climate change, tax, CAP, the future shape of the European Parliament, polling day, engaging young voters, pensions for EU Citizens in the UK and the border in Northern Ireland.

In summary, Gerard Arthurs, Lecturer in International Relations and Politics, WIT stated: “We are living in turbulent times, with Brexit being perhaps the most pressing economic -and political - challenge to Ireland's positioning within the European family. As the relationship with our nearest neighbour and major trading partner undergoes a transformative realignment, this Citizens' Dialogue is a timely opportunity for the people of the Southeast to not only hear from, but more importantly to engage with, the European Commission and their political representatives.” Arthurs added: “Waterford Institute of Technology working with Europe Direct, Waterford is honoured to provide this platform for engagement. With European Parliament elections in May 2019, it is more important now than ever to have your voice heard.”

The Waterford Europe Direct Information Centre, based at Central Library, Lady Lane is a service which helps the public find answers to questions about the European Union. It offers information on all sorts of subjects related to the EU including your rights and opportunities as an EU citizen. It can provide direct responses to general inquiries and, if you have more detailed questions, signpost you to the best sources of information and advice at EU, national, regional and local levels. 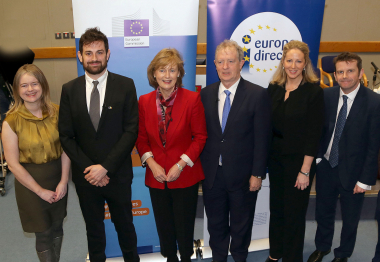