While his fellow students will be starting back to classes, Carrick-on-Suir, Co Tipperary student at WIT Sean Hahessy will be representing Ireland at Rio. The Irish Paralympic Team for the Rio 2016 Paralympic Games which will take place from September 7-18 2016 was announced at Dublin City Hall on 5 July. Sean is part of the Irish Cycling team and represents Ireland as a pilot to Damien Vereker (Co. Kilkenny now based in Waterford).

The team of 44 athletes, who will compete across nine different sports at the Games in Rio.

Delighted to be picked for Rio! Many thanks to all tagged for support throughout the year https://t.co/wefvcsIfiM pic.twitter.com/4LAp4vnIG2

The first wave of athletes will depart on August 23rd, and will use the Irish Holding Camp in Uberlandia, Brazil to prepare for the Games, which has been set up with the generous support of Sport Ireland.

Chef de Mission for the Irish Team, Denis Toomey, commented: “Team announcement day is a major milestone on Paralympic Ireland’s road To Rio.  Qualifications and selections are complete and today we announced those athletes who will represent Ireland at the Rio 2016 Paralympic Games.

“As Chef de Mission, it has been both an honour and a privilege to be tasked with telling the nation who the lucky athletes are and I certainly look forward to leading them all to Rio for the Games.”

Paralympic Performance Director, Dave Malone, spoke about the Irish Paralympic Team’s performance goals for Rio 2016: “Irish athletes will go to Rio this September and compete for glory against approximately 4,350 athletes from all parts of the world over the course of 11 days.

“The team is ready to achieve great personal and collective success at the Games, and their performances throughout the qualification process for Rio indicates that a medal target of eight for the team is achievable. We also anticipate a large number of finals from the team, and we are seeking career best performances from as many of the team as possible on the biggest stage of all." 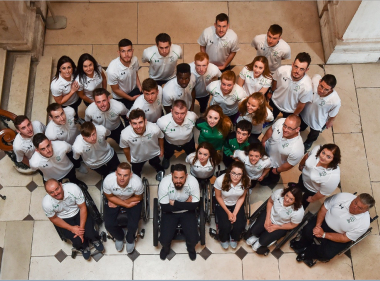