WIT's Dr Jimmy O’Brien Moran was invited to attend the annual conference of the US Fulbright Association in Washington DC and tells us his experiences.

As President of the Irish Fulbright Alumni Association, I was invited to attend the annual conference of the US Fulbright Association in Washington DC  on the weekend of the 12th November 2016. The conference had a busy schedule. On Thursday, there was a ‘speed networking’ event followed by the Fulbright Prize Ceremony attended by former senators and congressmen. A reception was held in the Atrium of the World Bank and was hosted by the University of Arkansas. The Atrium is essentially a huge courtyard space surrounded by buildings on all sides and covered by an enormous glass ceiling or roof. It is a very impressive venue and necessitated airport-like security to gain entrance. Executive Director of the Fulbright Association Mary Ellen Schmider opened the proceedings with a welcome speech.

The theme for the conference was ‘Meeting World Challenges’ which ran through most of the presentations. The main Conference events took place on Friday and Saturday. Friday morning had two key presentations, one discussing the ‘Challenges and Achievements in South America’, followed by a fascinating panel on ‘Meeting Global Health Challenges in Sub-Saharan Africa. This featured a very modest Professor Peter Agre, Nobel Laureate, whose research in Africa is proving effective towards prevention and cure of malaria.

The afternoon session was particularly good. The honoured guest was Harriet Fulbright, wife of the late J William Fulbright, and the discussion was called ‘Diverse Women in Leadership’. The panel featured three women talking about their struggles with diversity equality in their jobs. Among them was Azisa Al-Hibri is the founder of an association of Moslim Women Lawyers for Human Rights. An expert in Arabic writings and the Qur’an, Azisa has repeatedly debated and defended women’s rights with Imams and others. She was very impressive. Another panelist was Judge Maureen Duffy-Lewis whose presentation was very entertaining and she too has been a great supporter of diversity and equality.

The Fulbright Awards Banquet was held at the Organisation of the American States in the Hall of the Americas. It is a magnificent building, located off Constitution Avenue (not far from the White House) in an area known as Foggy Bottom, and the dining hall was set to accommodate about 350 diners. The evening was opened with some music from myself on the uilleann pipes and, following the meal, the awards ceremony was held. Ambassador Thomas Pickering gave an encomium on the recipient Richard Arndt who was then presented with the Fulbright Lifetime Achievement Award by FA President Nancy Neill.

Saturday morning had an interesting session that included three Fulbright Student Ambassadors and their experiences abroad. This was followed by ‘round table’ presentations which were generally less successful but interesting nonetheless.

The trip was enjoyable and successful and at least a little sight-seeing was achieved. My trip was made possible by the sponsorship of the Irish Fulbright Alumni Association.

Dr Jimmy O’Brien Moran is a Music lecturer in the Department of Applied Arts. 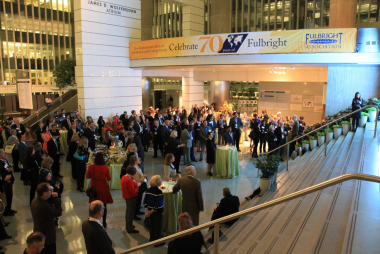