Sean Finn, a student of the BA (Hons) in Law degree at Waterford Institute of Technology (WIT), is the latest recipient of the Nolan Farrell & Goff Merit Prize, which is presented annually to a high-achieving student who excels in Land Law exams at the Institute.

Sean, currently in the final year of his degree, teams his high academic achievements with a solid foundation of industry experience. He was nominated as a class representative in 2010 and served as an Executive member of the Law society in 2011. Having recently completed a successful work placement with the Waterford Property Registration Authority and in 2011 with Francis X. Burke solicitors, a busy Dublin practice specialising in litigation, Sean has his sights set firmly on a career in law and has proved himself a worthy recipient of the Nolan Farrell & Goff Merit prize.

Donal O’Connell, partner in Nolan Farrell & Goff, presented the prize to Sean and said the award provided the firm with a great opportunity to recognise the achievements of future legal professionals who will work in the southeast and beyond.

“This is the ninth year of the annual merit prize being awarded to a student at WIT and we are very pleased to partner with the Institute in supporting this tradition. The merit prize recognises the achievements of a particular student and this year’s recipient, Sean Finn, has demonstrated particular excellence in his studies.

“This award also allows us to acknowledge the great work done by the Institute in providing an excellent programme for students wishing to pursue a career in Law.  On behalf of Nolan Farrell & Goff, we wish Sean the very best in his future studies and career.”

Dr. Ruaidhrí Neavyn, President of WIT said, “On behalf of the Institute I would like to congratulate Sean on this achievement. We are proud to have a student with exemplary academic achievements, a high level of involvement within the college and admirable external responsibilities, which can only serve as an example to future students. I want to thank Nolan Farrell & Goff for their support of the Institute over many years. Finally, I want to acknowledge the dedication of the law staff at WIT.”

In response Sean said "I am delighted and honoured to receive such a prestigious award. I would like to extend my thanks to Nolan, Farrell and Goff for their generous sponsorship and to all the law lecturing staff at WIT, having supported me throughout my studies. I intend to sit my FE 1 exams upon graduation next year and hopefully practice as a Solicitor in the future."

Among the largest law firms outside Dublin, Nolan Farrell & Goff Solicitors & Notaries was established in 1975 when two long established practices in Waterford - George A Nolan & Co (founded 1914) and Farrell & Farrell (founded 1920) - amalgamated.  The firm is a broadly based practice, providing a full range of private, commercial and industrial legal services for the south east region. 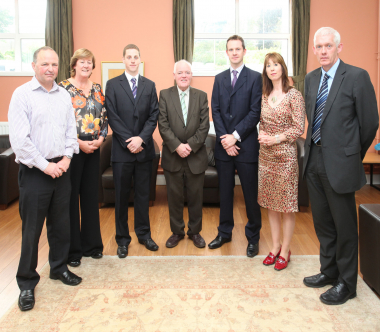