The very talented Freddie Walsh was awarded first place in the Senior Classical Guitar Competition at the Feis Ceoil in Dublin at the weekend.

Freddie is a final year performance student on the BA (Hons) in Music programme in the Department of Creative & Performing Arts at Waterford Institute of Technology.

Freddie studied classical guitar under professional performer Michael O’Toole for the past four years and during this time he has given numerous solo recitals and has also performed with the WIT Guitar Ensemble.

The pieces that Freddie played in the Feis are Sevilla by Issac Albéniz and Usher Waltz by Nikita Koshkin. He had recently performed this programme in Garter Lane Gallery & the Chapel in the College Street Campus of WIT.

Freddie is currently preparing for his final exams & plans to pursue an MA in performance in the future. 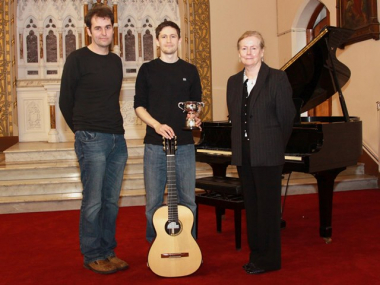