Edward Hayden says “Engagement within communities is so important and it was a wonderful achievement for the food writing students to qualify to compete in these awards. Nowadays we are so aware of the multi-pronged opportunities in the culinary sector, and this module and indeed this competition, exposes the students to these opportunities.

“This is the inaugural year of the competition and we look forward to seeing SETU represented at the Irish Food Writing Awards well into the future.”

The Irish Food Writing Awards hosted this year’s inaugural ‘Culinary Student Award’ as part of their suite of award categories.

The competition was two pronged and required students to construct a piece of writing about their chosen dishes, their inspiration and the rationale for their choice. The second element of the competition was to compete in a live cook off where their dishes were adjudicated by well-known chefs Jess Murphy, Kai Restaurant and Irish Times columnist, and Gareth Mullins, executive chef from Dublin’s Marker Hotel & commissioner general Euro Toques.

The awards were created by Paul O'Connor and Suzanne Campbell and were sponsored by Kerrygold. 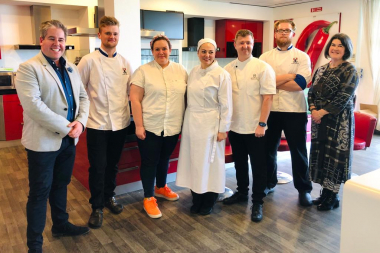