The Honourable Ms. Justice Mary Laffoy, Judge of the Supreme Court, commented at Waterford Institute of Technology that academic institutions, such as WIT, that support law faculty in engaging in research, provide an invaluable contribution to the legal profession.

Ms. Justice Laffoy, who is the first Supreme Court judge to visit an Institute of Technology, was at WIT to launch officially Albert Keating’s most recent book, Jurisprudence 2nd Edition (Round Hall: Dublin). In launching the book, Ms. Justice Laffoy described Dr. Keating’s publications on probate law as the authoritative works in this area and as deserving of the status of classic law texts.

Ms. Justice Laffoy was keen to stress the importance of an ongoing conversation between academia and practice, saying “I hope Dr Keating keeps up his good work. His publications on probate law and succession law are of exceptional value to practitioners.”

Dr Richard Hayes, Head of the School of Humanities opened the proceedings, saying “We are very pleased and deeply honoured to welcome Ms. Justice Mary Laffoy to WIT today. This is the first time a Supreme Court Judge has visited an Institute of Technology which is testament to Albert’s standing as an international expert in his field as well as WIT’s status as a leader in legal education.

“Not only do we have a vibrant research profile in Law but also have the first LLB (Bachelor of Laws) and LLM (Master of Laws) in the IOT sector. These courses are founded on the expertise faculty and we celebrate today the achievements of the entire law staff who have made law at WIT a byword for quality teaching and research.”

The author, Dr Keating, is the leading commentator in Ireland on probate law and succession law and has published extensively in this field. His books are used by all leading practitioners and are referenced in leading cases in the area. He was made a Doctor of Literature in 2005, based on his published works. 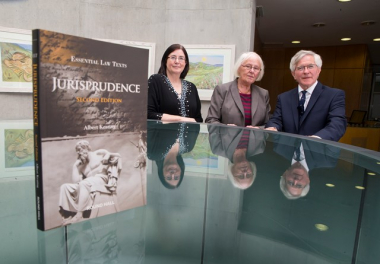