Takeaways from sports psychology that can help with CAO decisions

Have you ever been so afraid of failing at something that you just don’t try at all? WIT's Jess Lawton explains how fear of failure can apply to the CAO

Have you ever been so afraid of failing at something that you just don’t try at all? I meet with many athletes that have a fear of failure. In sport, this fear can stop people from taking on challenges or simply holding themselves back during competition so their performance is compromised. They find it difficult to reach their potential because they are too afraid to take chances in fear they might fail at it.

My role as graduate ambassador at WIT made me question why we change our minds on our CAO especially closer to the deadline. Last August following CAO Round 1 offers I listened to numerous students who had an offer of their first preference on the CAO who really wanted their second preference.

This brought me back to 17 year old me looking at a blank CAO wondering what I wanted to do with the rest of my life. I had 100 ideas going through my head and panicked at the thought of everyone but me knowing what I wanted to do the following September. I remember deciding that psychology was the route I wanted to take. I happily put it as my first option and thought no more about it until the Leaving Cert.

The Leaving Cert hit me with a bang and I dragged myself through it the best way I could. About halfway through the exams ‘reality’ hit: I panicked and convinced myself that I was being completely unrealistic and there was no way I would get the points required for psychology.

I went home that night and changed my entire CAO. While psychology was what I really wanted to do I moved it to number two and moved sports science to number one. To be honest I had just as much interest in the sporting sector but my heart wanted psychology. My mind convinced me not to set myself up for failure and be defeated by the system.

Fast forward to August when the CAO offers came out. I was delighted. I got my first preference. But still I couldn’t help myself and had to check what the points were for psychology. Shock, I had the points required but I knew there was no going back now. Nothing I said or did would change the fact that I was after underselling myself and settling for second best.

I luckily ended up in the field I really wanted to be in and completed the sports science degree and went onto do a masters in sports and exercise psychology.

Why do we convince ourselves that we want something different at the time of the Leaving Cert? Do we just fear failure? If you’re sitting the Leaving Cert it’s likely you are at an age where the fear of failure is heightened. Your mind may well be suggesting “Surely it’s easier to deal with it this way?”

Fear of failure can cause us to undermine our own efforts and abilities and this can very well be the case when filling out or amending choices on the CAO. We place so much importance on getting our first preference that we will actually change our order of preference to ensure that we get our number one choice even if that means our number one on our CAO isn’t a direct reflection of what we really want.

Think about my story, and how you would feel if what you really wanted to do was second on your CAO list and during the CAO Round 1 offers you have enough points for it but have no chance of starting on the course because you have been offered the course that’s above it on your list.

To stop ourselves from doing this we really need to understand what ‘failure’ is. We all have different definitions of failure. This is because we all have different benchmarks, values and belief systems. In other words a failure to one person can be seen as an opportunity to grow and learn by another. When we fear failure we stop ourselves from doing things that help us to move forward. And in the case of the Leaving Cert student filling out their CAO that may mean they stop themselves from putting what they really want as their first choice because they fear that they will have to deal with not reaching their goal.

When we fear failure we actually begin to self-sabotage. This becomes evident when we fail to follow through with the goals. In sport, athletes set goals all the time such as wanting to win the league, tournament or any other major competition. Other goals athletes set include fitness, making teams and many other areas of performance. How does this apply to CAO? Think back to when you filled out your CAO with no pressure – e.g. before the 1 February deadline rather than closer to the 1 July change of mind deadline.

Your first choice was probably what you really wanted to do. There was no real pressure back then, it still felt so far away and while points were at the back of your mind they didn’t have the power to dictate what went down on your CAO. Subconsciously you set a goal. Your goal was to sit the Leaving Cert, achieve the points and entry requirements for the course and begin your dream course in September.

The combination in June of the Leaving Cert exams and the 1 July deadline for CAO decisions is stressful. There are some people who can make really good decision when they are stressed but there are many of us who make rash decisions that can have long term effects when we are stressed. Changing your CAO ‘order of preference’ because of points is one of those rash decisions.

So, please, Leaving Cert students, do yourself a favour when you’re reviewing your CAO list. Be kind to yourself. Give yourself every opportunity. Don’t let your perception of ‘failure’ determine your life or stop you from putting your dream course as number one on your CAO regardless of how the exams are going. Talk to someone calm while you are stressed and about to make a rash decision.

Remember you have no control over the points for courses. Course points rise and fall every year; always expect the unexpected. Always have a plan B and learn to think more positively. Albert Einstein got expelled from school and still won a Nobel Prize in Physics. His outlook was ‘success is failure in progress’.

Put away your CAO crystal ball and the calculation of points you may or may not get for now.

Concentrate on getting through the exams and give them your best shot. Remember there is more to life than exams and there is a lot more to you than the results.

If you fear failure, an important learning is that it is almost impossible to go through life without experiencing some kind of ‘failure’. It’s not a crime to fear failure, but its impact can be a life sentence depending on your aptitude and attitude. If you don’t try for what you really want you will never get it anyway.

I have made the conscious decision to see my ‘failures’ as opportunities to learn and grow.

So, use your CAO wisely. Put down the unthinkable. You don’t have to tell anyone what your number one is on your CAO if you don’t want to.

We are influenced by those closest to us such as friends, family and teachers. Sometimes these well-meaning people can influence our decisions on our CAO, including putting something that’s not our first preference in top place.

If you’re still unsure think of it this way: if money was no object what would you do in life? How would you enjoy your time? Regardless of what anyone else thinks you will always make money in an area of interest if you apply yourself.

An edited version has also been published on the Irish Independent, click here

Jess Lawton works in Waterford Institute of Technology’s (WIT) Admissions office and was a 2018/2019 graduate ambassador on WIT’s graduate programme. She is a graduate of the MSc in Applied Sports Psychology at WIT and in her spare time works with Cork City as a Performance Coach. 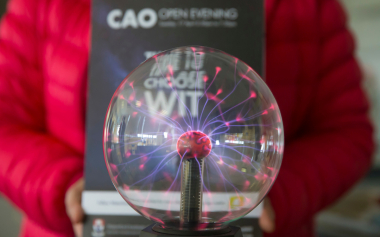 "Put away your CAO crystal ball and the calculation of points you may or may not get for now. Concentrate on getting through the exams and give them your best shot." Photo: Patrick Browne