The Taoiseach, Mr. Enda Kenny T.D. launched the Vision Research Centre at Waterford Institute of Technology on Friday, 23 March 2012.  Based in Carriganore House on WIT’s West Campus, this
research and vision testing facility will house WIT’s Macular Pigment Research Group (MPRG).  This is the only research facility of its kind in the world and marks MPRG’s position as a world leader in nutrition and vision.

Much of the MPRG’s work relates to the study of AMD (age-related macular degeneration), the leading cause of age-related blindness thought to affect up to 80,000 people in Ireland and costing the state up to €133 million per annum.  The team of 10 full-time researchers based at the Vision Research Centre includes vision scientists, nutritionists, biochemists, statisticians, optometrists and ophthalmologists.

“As a small country with a very open economy, we need to focus on a certain number of niche areas where we can genuinely compete with the best – and be successful – as is being demonstrated by the top-class people here at the Vision Research Centre. Through your efforts here you are striving to improve the quality of people’s lives by attempting to minimise the degenerative effects of age-related blindness, while your scientific research effort also continues to make a significant commercial impact and is already delivering quality jobs for the Irish labour market.”

"MPRG's work over the past ten years has added to WIT's reputation as a higher education institute with a strong research focus. Their new facility, based in Carriganore House, will further enhance this reputation as well as adding a new dimension to the South East region's capabilities as a centre for cutting edge research. We are proud of the achievements of Dr. John Nolan and his team in bringing this to fruition"

“The Vision Research Centre is the only one of its kind in the world because it brings together a range of state-of-the-art vision testing equipment in one location. This enables our PhD students and scientists to conduct and manage clinical trials in the area of nutrition and vision to the highest possible standard. The Vision Research Centre also provides the ideal environment for patients participating in our ongoing clinical trials

The uniqueness of our facility lies in our ability to measure vision at a super-sensitive level. Over the last ten years, we have been working to identify the best ways to measure vision in people with and without eye disease. In doing this, we have discovered that a nutritional pigment at the back of the eye, known as macular pigment, is key to enhancing visual performance and protecting against AMD.

Having experienced and worked in top level research facilities in Europe and the United States as part of my Fulbright Scholarship, I am extremely proud to see that Waterford now offers the world’s leading vision and nutrition research facility.”

The MPRG has several research projects underway at present. The largest study, known as CREST (Central Retinal Enrichment Supplementation Trial), received €1.5 million of funding from the European Research Council (ERC) to examine the role of nutritional supplements in visual performance and the prevention of AMD. WIT is the only Institute of Technology to receive funding from the ERC. This research grant has enabled the MPRG to employ five additional research staff.

Three other projects are also underway, thanks to funding from the Cambridge-based Howard Foundation and Waterford-based Nutrasight Consultancy Ltd.  These include the MOST (Meso-zeaxanthin Ocular Supplementation Trial) study, which has already shown important links between supplements of meso-zeaxanthin (the central component of macular pigment) and improvements in macular pigment levels and vision.  Another study, known as EXIT (Egg Xanthophyll Interventional Trial), is researching the role of nutrition in eggs for eye health. Later this year, the MPRG hopes to start a project examining the potential role of nutrition in the prevention of Alzheimer’s disease.
The funding for these current projects comes from commercial and foundation grants, and competitive funding from the European Research Council. 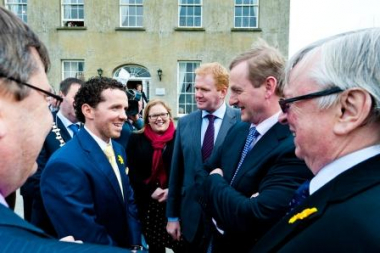