The Honourable Danny Williams conferred with Honorary Fellowship by WIT

The Honourable Danny Williams, Premier of Newfoundland and Labrador, has served as the Member for Humber West since August 2001 and as Progressive Conservative Party Leader since 2001.

A student of Political Science and Economics at Memorial University of Newfoundland, he was awarded the Rhodes Scholarship in 1969 and also received a Degree in Arts in Law from Oxford and a Bachelor of Law degree from Dalhousie University in Halifax. He commenced practising law in Newfoundland and Labrador in 1972 and was appointed Queen's Counsel in 1984.

From 1975 Mr. Williams guided Cable Atlantic through major acquisitions to become one of the largest communications companies in Atlantic Canada.  He has been involved in Newfoundland and Labrador's oil and gas industry as president of offshore oil and gas supply and services company OIS Fisher, and has also been active in the hospitality and tourism industry.

Mr. Williams has served as a member of the Board of Governors of the Canadian Sports Hall of Fame, as Chair of the Canadian Parliamentary Channel, Newfoundland and Labrador Film Development Corporation and of the Provincial Government Offshort Oil Impact Advisory Council, and as a member of charitable organisations such as the Terry Fox Marathon of Hope, Big Brothers/Big Sisters Irish Kirby House and the Arthritis Society. 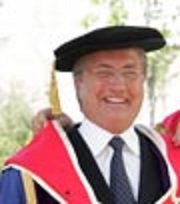