Three steps to returning to college as a mature student

When the country dipped into recession an ill-wind blew for many people. And for Waterford man Maurice Foley, who had completed a four year plastering apprenticeship, this meant finding a new area of work. Little did he know he would end up going back to college full-time.

“When I was made unemployed from my job as a plasterer in 2008 I realized that it would take a long time before the construction Industry would return to the level experienced during 2007,” he recalls.

At the height of the economic downturn, Maurice watched some of his close friends leave Ireland, for countries such as Canada, Australia and England in the hope of work. This departure was not an option for Foley as he was father to a three year old, making the move impractical.

“However after the downturn in the construction industry I got a job with a local company Sunstream Energy. I often though about going to college but I never did anything about it until 2011,” he says.

His work with Sunstream Energy saw him travel around Ireland installing wind turbines and solar panels – it was project-based rather than constant work.

The three steps to making a life-changing decision

In late 2011, he took the first step of looking at the WIT website for courses that he would be interested in.

After that Foley got in touch with the Regional Educational Guidance Service, which is based on WIT’s College Street Campus. “I got a lot of valuable information and guidance from the staff that worked there.”

“I also went to a college open evening, where I spoke to the head of engineering department regarding the courses that were available,” he adds.

Foley then made the decision to go to college, putting BEng (Hons) in Mechanical & Manufacturing Engineering at WIT as his first preference choice.

“I was delighted when I got accepted on this course,” he says. His battle wasn’t over though – he still had himself to convince.

“During the weeks before college was due to start in 2012, I began to question my ability to learn the content of each module, after all it had been over 10 years since I was in school. However I was determined to get back into full term employment and I felt that education was the only way forward.”

In 2012, Foley enrolled on the four year Level 8 course, which focuses on the design and development of products and processes. The first few months of college he did nothing but study, he recalls. “Not because I had to, but because I wanted to.”

As a result he passed all his Christmas exams that year and thankfully up until now this success has continued for him.

In 2015, as part of his BEng (Hons) in Mechanical & Manufacturing Engineering course, Maurice did his work placement with Genzyme in Waterford.

Following his time at Genzyme, Foley won the award for best work placement student with Genzyme in 2015 and received the award in recognition for his time and dedication onsite during work placement in the in Process Engineering area there.

“I would encourage all people who are in a similar position to what I was back in 2008 to consider returning to education. The modules are taught by excellent and friendly lectures who are always there to support students. Looking back to when I first started in 2012, the time has gone very quickly, I sincerely enjoyed my time studying at WIT. I have met a lot of great people and I have also met a lot of people that I consider now as great friends.” 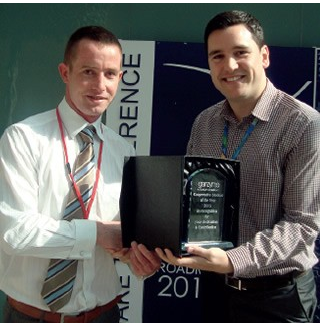 Pictured is Maurice receiving his award from Genzyme