Phil Hogan, the European Commissioner for Agriculture and Rural Development addressed students, staff and invited guests on the topic of Agribusiness in the 21st Century as part of the School of Business' Top Leaders' Forum.

Commissioner Hogan engaged with over 90 Masters-level students from the School of Business and emphasised the challenges and opportunities for entrepreneurs in the agri-food sector. In his remarks, the Commissioner, who commands an annual budget of more than €40 billion, spoke of the continuing need for innovation and market-oriented approaches from farmers, producers and retailers to meet the growing food needs of the world’s 7 billion population.

Citing Ireland’s advantages in terms of climate and geography, Mr Hogan was speaking as negotiations continue at the Cop21 conference examining the challenges of climate change in the coming years. In answering students’ questions, the Commissioner covered areas as diverse as Brexit, Transatlantic Trade negotiations, the prospect of Turkish entry to the EU, the value of teamwork – and the potential nutritional benefits of insects.

Introducing the Commissioner, the Dean of the School of Business, Dr Thomas O’Toole, quoted US President John F Kennedy’s dictum that ‘leadership and learning are indispensable to one another,’ and that the Top Leaders’ Forum plays an integral role in exposing WIT’s business students to leaders of the highest calibre. He noted that Mr Hogan was the third consecutive European Commissioner to partake in the Forum and that, as a native of the South East, Mr Hogan was particularly welcome to the Institute.

Dr O’Toole thanked the Commissioner for engaging with the students and also for hosting WIT Business students in March 2015 as part of their International Study Tour. He noted that: "The Top Leaders’ Forum, and the International Study Programme, elevates our students’ experience giving them direct access to the highest levels of leadership in Europe and giving them that competitive advantage that WIT students receive as they embark on their careers." 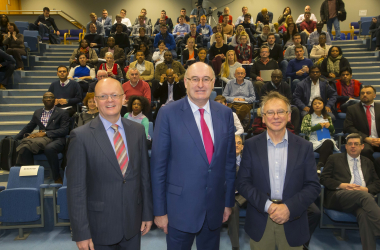