The 30-month CogNet (Cognitive Networks) project, co-ordinated by the Telecommunications, Software and Systems Group (TSSG) at Waterford Institute of Technology, is the only Irish-led project approved under the Horizon 2020-financed, 5G Public, Private Partnership programme (5G-PPP).

CogNet will develop solutions to provide a highly automated and more intelligent level of network monitoring and management, improve operational and energy efficiencies, quality of experience for the end user and facilitate the requirements of 5G.

CogNet is a complex, multinational project with a balance of industrial, research and academic partners—from the telecoms provider, equipment vendor and research domains related to machine learning, next generation networks, cloud computing and data analytics. Partners include Fraunhofer Fokus in Germany, Telefonica in Spain, universities in Madrid, Berlin and Italy as well as VicomTech in the Basque Region and Israel partners, Alcatel Luvcent and WeFi.

Co-ordinator, Robert Mullins, says it gives TSSG and their project partners across Europe a central role among those building a future-proof, fit for purpose 5G network. It will also see them working alongside tech experts and global industry leaders in the sector.

The 30 month, intensive project will require 6 full-time, highly-skilled staff, some with PhDs at TSSG. “We now have an opportunity to play in the premier league of European telecoms. Everyone that is anyone in the 5G space is involved - all the major companies, research groups and universities with expertise in this area.

“Only 15 projects were approved and we’re the only Irish-led project. We’ve got a great team and we’re really looking forward to getting started. Our mission is to build a faster, better technical infrastructure for the billions of inter-connected, smart devices, among these cars, phones and wearables, buildings and appliances. It has to be mobile, it has to be wireless.

“The 5GPPP is very important as it is part of a strategy to help put Europe back at the forefront of the telecommunications industry. In the past 10 years we’ve seen the rise and influence of Silicon Valley companies such as Google and Apple, and Asian smartphone manufacturers such as Samsung and HTC in an industry that had previously been dominated by European companies such as Nokia, Ericsson and Siemens. This is a chance to regain some lost ground.”

Cloud Infrastructure Researcher at TSSG, Joe Tynan, added: “We will specifically look at network management issues – how do you manage a network of this scale which is so big that humans can’t manage it. It has to be largely self-managed. A team of six will work on this project at TSSG in Waterford and Kilkenny and we will need to recruit staff with PhDs in computer science, maths and engineering for this work.”

TSSG COO Kevin Doolin said it’s a great win for TSSG and said the project team will be busy but will deliver. “Europe has very high expectations. Ireland is leading a project; it is in the starting 15 and there will be strong pressure to perform and deliver.

“There are milestones to be achieved and end goals have been set. It will be exciting and it is definitely one of the most important that TSSG has ever won.”

The project will conduct and exploit leading research in the areas of data gathering, machine learning, data analytics and autonomic network management. The ultimate objective is to enable the larger and more dynamic network topologies necessary in 5G, improve the end-user Quality of Experience and to lower capital and operational costs through improved efficiencies and the use of node, link and function virtualisation.

The consortium has considerable management experience with the EU’s Framework Programme. The coordinator, TSSG, will take best practices from previous projects, such as “PERSIST” (€5M STREP, [url=http://www.ict-persist.eu]http://www.ict-persist.eu[/url]) which gained a result of “excellent” in its final review, and “SOCIETIES” (€15M, IP, www.ict-societies.eu) which received significant praise from its external reviewers based on its various reviews, noted as being “scientifically and technically profound”.

CogNet’s Robert Mullins and the leaders of the other projects are also involved in European level 5GPPP Working Groups which will coordinate activities across the 15 projects and will also link back to TSSG which is developing a National Software Defined Networks (SDN) Working Group. Kevin Doolin, COO of TSSG is heading up the National SDN working groups, alongside Dr Steven Davy who was recently selected to act as an Expert on SDN and Network Management for the Networlds2020 ETP.

These two unique links will allow TSSG to engage with companies across Europe on future network issues during H2020. Having both Robert Mullins and Steven Davy involved gives Ireland a fantastic platform to work from and leaves it uniquely placed within Europe as a leader in the critical sector. 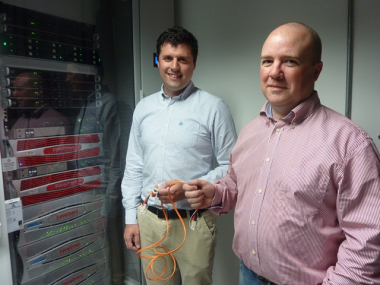