Two recent WIT graduates Chloe Hehir (Vitaeas) and Conor Walsh (ENCON) who have taken the entrepreneurial path were recognised for their innovation recently at the Waterford final for the 2017 Ireland Best Young Entrepreneur competition for their enterprises.

Chloe Hehir was announced as the runner-up in the ‘Best New Idea' category for her business idea, ‘Vitaease' a fruit flavoured drink, which has beneficially added functional ingredients targeted for the elderly consumer. Chloe holds a Food Science degree and has worked in a nursing home where she has witnessed how the eating habits and attitude of the elderly person to food greatly changes.

She developed this product during her final year of her programme at WIT. While in WIT, Chloe was awarded the 2017 "Dawn Meats Innovation Award" for the passion, commitment and hard work she showed in the development of her idea.

“I am delighted to see that a former student of BSc. in Food Science and Innovation, Chloe Hehir has featured as a runner up for her business idea at Waterford Local Enterprise Office awards which was part of the selection process for "Ireland Best Young Entrepreneur 2017,” said Eleanor Kent, Assistant Head of the Department of Science at WIT.

“Chloe`s success is testament to the great work and commitment shown by the teaching staff of this successful programme.”

Conor Walsh, a final year Quanitity Surveying student was announced as the runner-up in the Best Established Business' category. Conor founded ENCON a construction business in the energy-efficient construction sector for new and existing buildings. Conor has invented a product with a Patent filing in the United Kingdom's Intellectual Property Office (UK IPO). This filing when granted will offer protection in the UK, with a provision to file for global Patent protection within twelve months of the IP being granted by the UK IPO. This product will concentrate on supplying prefabricated walling systems to the domestic housing market both here in Ireland and the UK. Encon has five full-time employees.

"I was delighted to be in the running for this award never mind being placed. I am promoting Energy Efficient Construction Practices for many years now and it was fantastic to get some recognition for my commitment to the sector," says Conor

He was also part of the team that won the Chartered Institute of Building Student Challenge last year. He has also had a previous project completed by his company - Encon - published in both the Passive House Plus Magazine and Qualibuild Publications.

Additionally, In the ‘Best Start-up' category, a former New Frontiers programme participant Anthony Cronin was announced as the winner for his business Flexiwage. 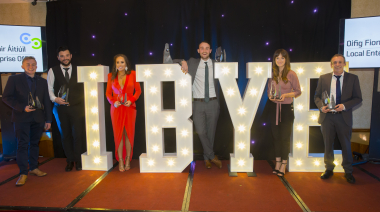