Students on WIT’s BA (Hons) Design (Visual Communications) course will have their posters on show at VISUAL Carlow as part of the Join In Festival taking place from Thursday 30 March to Sunday 2 April in partnership with Carlow Library.

As the second year students were tackling their first poster design, basing it on an upcoming festival made the project a reality. They worked on the project over the first semester, using a brief from VISUAL which described the ethos of the new festival.

The winning poster was designed by Eimear Ng. Eimear wins a two-week internship in VISUAL and all of the posters will be displayed on large scale in the iconic venue for the month of April.

Communications Manager Oren Little remarked, “The standard of the overall design and the thinking processes behind them were very good. There were many posters that were worthy winners. Eimear Ng’s poster won due to its colourful simple design that captured the spirit of what we are trying to achieve with this first festival.”

Eimear wins a two week internship in VISUAL and all of the posters will be displayed large scale in the iconic venue for the month of April.

Lorenzo Tonti, lead lecturer for the project says: “The opportunity to work with such an impressive art centre was very appealing. Because of its central location in the town, it is a hub for the community and is open and welcoming to everyone. The prospect of having an exhibition of all the posters during the festival was definitely an incentive for the students to show off their design work in public. We saw it as an opportunity to generate interest and share our passion for graphic design and its role in contemporary society. Collaboration on an actual real life project is also an important tool in the promotion of the BA (Hons) Design in Visual Communications course at WIT.”

Lorenzo, lecturer in Visual Communications at WIT has also played a part in the festival’s popup poetry poster project. A popup poetry exhibition will feature works chosen by Carlow Library writer in residence John MacKenna. Designed by Lorenzo, the works will be displayed in vacant shop windows leading up to and after the festival.

Sheila Naughton, lecturer at WIT will also lead a drawing event around Carlow. On Sunday 2 April, Sheila will lead a day long walk and draw event through the streets of Carlow looking at the architecture of the town.

Join In Festival is taking place from Thursday 30 March to Sunday 2 April in partnership with Carlow Library. The aim is to inspire people to get actively involved and join in with their community, and to raise awareness of the variety of activities available in Carlow. VISUAL is working with the Volunteer Centre, KCAT, Community Garden, Sports Partnership, Callan Bridge Street Project, Carlow Youth Theatre and Carlow Regional. Students from Designcore, Institute of Technology Carlow, are working on research projects at VISUAL for the duration, alongside 3rd level students from Dublin Institute of Technology.

WIT 2nd year design students designed the promotional poster and this will be on display. 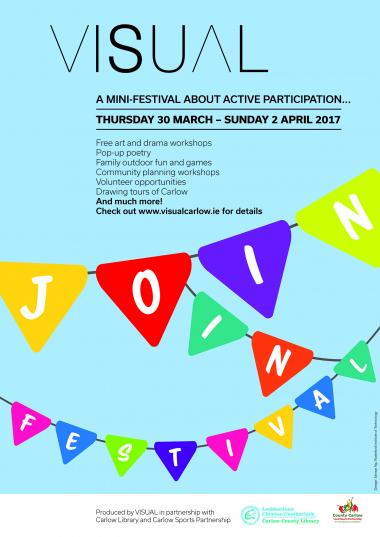 The winning poster was designed by Eimear Ng. Eimear wins a two-week internship in VISUAL and all of the posters will be displayed on large scale in the iconic venue for the month of April.