BBS (Hons) graduate Conor Murray from Rathgormack, Co Waterford shares his experience of playing with the college team and life around college.

How did you find starting football in first year?
It was good, throughout the year I was still playing with my club and the county so it was good to play with lads from other counties to get a feel of that.

Would you say that it helped the transition into college?
Oh definitely yeah, we had a core group of lads there from first year and I became great friends with them, lads from first and second year all over the country, it made the transition a lot easier.

Would you say you’re still friends with most of the lads?
Yeah I just met one of the lads there as I was coming in, Jamie Snell, so it’s great to meeting up with some of them today and hopefully we’ll keep in touch for the years to come

You’ve played football all four years in the college?
Yep four years now, we had no luck really we got bet in three finals which is still a great achievement and it made the most of the year we got a good run of it, we were playing from October to around March so we had a long year but it was still a great experience.

How did you find Waterford in general?
I’m actually from Waterford myself so I was living at home, I was going up and down every day about half an hour of a trip. The facilities were great though like if you had a class off there was plenty.

Interviewed by Ian Bradley at Conferring 2018 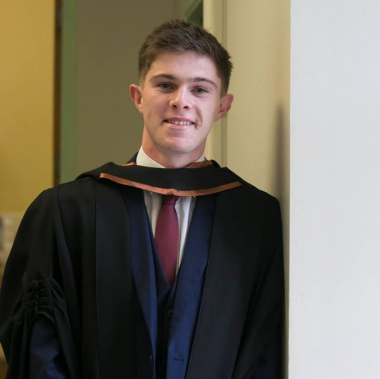