Since launching, the Pharma Industry Awards has established itself as the benchmark for excellence for those operating in Ireland's pharma industry

Waterford Institute of Technology (WIT) has won two awards at the Pharma Industry Awards 2017. The awards went to WIT’s BSc (Hons) in Pharmaceutical Science and the Pharmaceutical and Molecular Biotechnology Research Centre (PMBRC)

WIT had been shortlisted in three categories at the awards which recognise and celebrate the most original and innovative individuals and organisations that demonstrate excellence in the Irish Pharma sector.

The PMBRC was shortlisted in two categories the “Pharma Research Centre of the Year” and “Research and Development Achievement” categories, winning the latter. PMBRC is an applied research centre which aims to support the sustainable growth of the pharmaceutical and healthcare industry in the south east of Ireland.

Since launching in 2014, the Pharma Industry Awards has established itself as the benchmark for excellence for those operating in Ireland's pharma industry.

The winners were announced at the Pharma Industry Awards 2017 ceremony on Thursday, 5 October at the Clayton Hotel Burlington Road, Dublin. 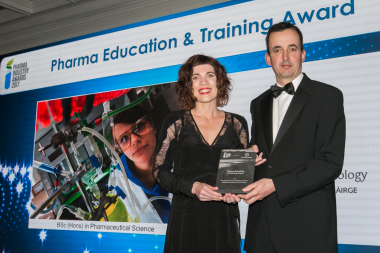