The ‘Re-Fashioning the Future’ project, led by Walton Institute in South East Technological University came to a close in Central Library this week.

The overall aim of the project is to engage traditional craft/textile makers in eTextiles and provide the technical skills and know-how to sew simple electronic circuitry in fabric with conductive thread opening new opportunities for wearable Internet of Things (IoT) applications across a variety of sectors including wearable healthcare monitoring, innovative fashion, entertainment, wellbeing, and interior design.

Participants in phase one gained insights into eTextiles and its applications from Aileen Drohan, Experienced Software Research Engineer at Walton Institute, while also quickly learning how to work with sewable electronics and uploading computing code to circuit boards. Eight traditional makers learned this new skill in phase one before embracing the challenge of sharing their new talent by delivering eTextile workshops to community groups throughout Waterford including Ukrainian refugees, Shakti group and Waterford Women’s Shed in phase two. The newfound creativity and expertise of the makers was evident from the innovative electronic textile items each community group created.

Commenting on the impact of the workshop series, Aileen said "from experimental eTextile fabric items to a range of twinkling fabric flowers and individualised tote bags, the calibre of work created was exceptional. Considering over half of attendees were initially unfamiliar with the term electronic textiles or eTextiles, they all said they would participate in similar workshops. Requests for more eTextile workshops from both the participants and community groups outside the scope of the project is a testament to the success of Re-Fashioning the Future, the professionalism of the phase one participants and their exceptional workshop delivery skills.”

Speaking about the success and importance of this community initiative at the closing event included Emma Haran of Waterford Cultural Quarter, and Cllr John O’Leary, Mayor of Waterford City and County who presented participants with a certificate to mark their completion of the workshop series.

Frances Cleary, Head of Division in Walton Institute is delighted with the success of Re-fashioning the Future series and is looking forward to seeing the area grow in the region.

“The future of eTextiles and smart materials is rapidly expanding globally with a particular focus on health and sport industries. Walton Institute along with its funding partners Creative Ireland and Waterford City and County Council are now part of this emerging sector. With the impressive fashion and interior design VTOS courses on offer in Durand’s Court, we are excited to see the role future graduates play in expanding Waterford’s impact on the eTextiles sector.”

The state-of-the-art eTextiles lab in Walton Institute is funded by Enterprise Ireland with an aim of supporting start-ups and SME’s to leverage this emerging field by advancing technologies to provide more intelligent smart garments and fabric-driven innova­tive applications. 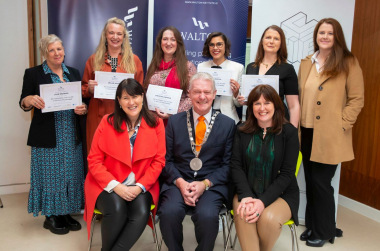 Presentation of certificates to participants of Re-Fashioning the Future