The judging panel noted culinary lecturer Tony Barry’s level of passion and commitment to his work, which was described as ‘exceptional’

Having worked as a chef since the age of 14, he rose to the position of head chef before beginning his teaching career with Fáilte Ireland, joining WIT in 1993.

The adjudicating panel unanimously voted Tony the successful recipient of the WIT Teaching Excellence Award 2017 for the level of passion and commitment to his work that he showed, which was described ‘exceptional’.

On receiving the award Barry said: “I am delighted to accept the award not only for myself but also for the Department of Tourism & Hospitality. It means a lot to me that my colleagues nominated me for the award. I consider it a privilege to be given the opportunity to pass on the culinary skills I have developed to the future chefs.”

The panel commented on Tony's passion for his work, his engagement with his students and his commitment to his own professional development.

“Tony clearly demonstrated a strong student centred approach to teaching and his philosophy and values were clear when he described how he interacted with students,” said Dr Murphy.

“Tony's commitment to his teaching was exceptional, his innovative approaches to learning especially his use of experiential learning with students was truly inspiring. His use of multiple ways of engaging students was both creative and innovative and his close connections with the industry were clearly of great benefit to his students.”

While working at WIT Barry completed an honours degree in Hospitality Education and post graduate studies in Education and Food Product Development and Culinary Innovation.

“During my time at WIT I have been involved in a number of projects, the herb garden at the Cork Road, the vegetable and fruit garden at Carriganore, the development of the culinary society. I have mentored students national and international competitions: Knorr Chef of the Year, International Cook Serve, Chef Ireland, International AEHT, World Skills,” he continued. 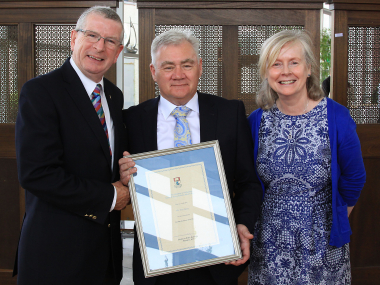