Students starting at WIT in September will benefit from the sports facilities; a free shuttle bus will link WIT’s main campus with the €20m WIT Arena

The doors of the WIT Arena on Waterford Institute of Technology's (WIT) West Campus, Carriganore, Waterford were opened for a number of preview tours for staff, and media on Wednesday, 8 June.

As well as serving as a sports facility for students and a resource for the Department of Health, Sports and Exercise Science, the WIT Arena will be a valued addition to the region as a conference, entertainment and sporting venue.

WIT personnel got the chance to view the impressive new facilities first-hand before they are opened to the public in September 2016.

The multi-purpose sports arena building at WIT’s West Campus, Carriganore is due for completion over the summer and students starting at WIT in September 2016 will be the first to fully benefit from the sports facilities on offer. A free shuttle bus will link WIT’s main campus on the Cork Road with the €20m WIT Arena.

Visitors were addressed by WIT President, Prof Willie Donnelly and Mike Geoghegan, CEO of Direct Campus Services which supports the non academic service requirements of students and staff at WIT such as accommodation, food, sport and fitness.

The Department of Health, Sport and Exercise Science faculty and sports scholarships students were also in attendance. A fact-filled tour of the extensive facility was given by Sport & Recreation Manager Michael Evans.

Prof Donnelly highlighted the opportunities the finished facility will offer to the region, the local community as well as current and future students.

“This is a fantastic addition for anybody who wants to study in WIT. It’s going to provide probably one of the best indoor and outdoor sports facilities in Ireland. I think it’s particularly important that students have this access to both the best education and the best facilities for health and fitness.”

Mr Geoghegan welcomed the opportunity to work on the new sports arena. “I believe in the importance of the link between sport and education and I think this facility will serve the students and the community for years to come.”

The completion of this building will complement the existing grass, all-weather and support facilities at the sports campus. The completed facility will provide up-to-date modern and scientific sports facilities, gymnasiums, teaching and learning lecture rooms for the Institute’s student and staff community.

It includes a 2,000 sq m ‘aula maxima’ or great hall where large scale official WIT events can be hosted. This facility will also be suited to host conferences and large external sporting, business and social events for the region.

“We look forward to teaching and learning in an environment that will so strongly support an ethos and practice of innovation, performance and real world engagement. The WIT Arena can inspire us to be better and to reach higher by working closely with the wider sport, business, health, science, engineering and humanities sectors across the Institute, and to engage in new ways with our local community.”

How the Department of Health, Sport and Exercise Science will work in WIT Arena

Dr Aoife Lane, Head of the Department of Health, Sport and Exercise Science explains how students in the Department will get a chance to avail of the facilities in the Arena at different stages during their four years of study.

We will deliver academic and practical classes in the Arena, and are particularly looking forward to availing of the Elite Weights and Performance Testing areas. We have several high end sports performance and fitness/conditioning modules that can now be delivered in state of the art facilities.

We also work quite frequently with high performance athletes to deliver testing and some exercise prescription – this can now be carried out in the Arena and will serve to build our image as the regional leader in this industry.

Exercise classes for at risk people

We are also preparing to deliver exercise classes for at risk populations using a model developed in DCU called MEDEX. This will incorporate a partnership between the Arena and our Department, which will further strengthen our working relationship.

Work started on the initial part of the first phase of the development in August 2007.
This consisted of three sand based grass pitches, training areas and the laying of the base for the all weather pitch.
June 2008 the floodlights were erected on the three grass pitches.
June 2009 the finishing work started on the all weather pitch.
Also in that same year the building work commenced on the dressing rooms.
March 2010 the WIT Senior Hurling team were the first team to use the new facility.
Early 2012 work commenced on phase 2 of the project the main building.
November of the same year the project came to a halt.
Late December 2015 work recommenced on the main building.
Completion date August 2016, Open September 2016.

With the completion of phase 2 of the development the WIT Arena will have available:

The facility is mainly used by our WIT Clubs and Societies; their usage will now increase with the opening of the new building.

The WIT sports related courses in the Department of Health, Sport and Exercise Science have to date used the outdoor facilities for practical teaching courses, the addition of the class rooms, the high performance area and the main hall will be a huge addition to the delivery of their courses.

Numerous local regional and national sporting organisations have used the facility since it opened. These include all levels of the GAA under age to senior, ladies and men, the FAI, Munster Rugby and athletics. It is estimated that well over half a million people men women and children have gone through the facility since we opened in 2010.

It is envisaged that of our usage will grow with the addition of the new building, this will include new sporting and other events that neither we nor the region would not have being in a position to facilitate in the past.

While there are no short or medium term plans in place, in the longer term land is available for the development of both an athletics track and a 50m swimming pool; it is also possible to develop a small marina and boathouse close to the river, this would allow for rowing, sailing and kayaking. These projects could only be considered longer-term if external funding was provided for them. 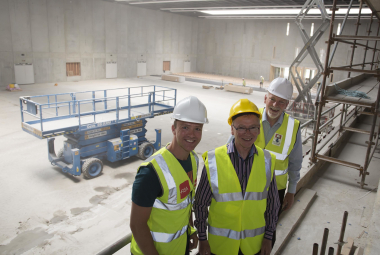