Waterford Institute of Technology recently held its Sport Scholarship Programme Awards Ceremony for the academic year 2016/2017 with over 79 students recognised for their contribution in 12 different sports.

On the night special guest and Waterford senior Hurling manager Derek McGrath spoke about the important role that scholarship students have and challenged them as elite sports people to not only lead by example in their sport, but in education and keep true to the value of the Sport Scholarship Programme.

While scholarship bursaries are offered, the Scholarship Programme places a strong emphasis on academic support to students along with personal and sporting development. Workshops are provided in the area of mental health, cooking, sport psychology and nutrition while medical and physiotherapy support is provided to the students.

This year’s GAA scholarship students include GAA Scholarships 2016 Senior Hurling Player of the Year Austin Gleeson and Camogie Player of the Year Denise Gaule, while Meighan Farrell and Julianne Malone also received All Star camogie awards for 2016. New to the GAA programme is 2016 All Ireland minor hurling winner Michael Whelan from Tipperary. WIT continue to attract talent from the Midlands with Offaly sharp shooter Mairead Daly and Joe O’ Connor (Hurling & Football) one of three rewarded on the programme from the Faithful county alongside Westmeath senior footballer Boidu Sayeh.

New Waterford United goalkeeper Mathew Connor received a Silver Scholarship on the night while Chelsee Snell who made her Champions League debut for Wexford Youths Ladies adds to what is already a strong contingent of Youths Ladies currently on Scholarship.

Mark Fitzgerald of Bausch & Lomb presented the Soccer Scholarship Programme awards as Bausch and Lomb further strengthen their link with the institute by helping with the academic and sporting development of two extra WIT soccer players for the 2016/2017 season.

Sport Scholarship Programme coordinator Alan Malone said: “We are delighted once more to reward our leading sporting talent across a wide variety of sports with the support necessary to continue to better themselves both in their studies and sport. Sport plays such an important part of Irish life and our Scholarship students are not only ambassadors for WIT but role models in society”.

The deadline for early WIT scholarship offers is 1st March. The application process will reopen 1st April until 12th September.  More information can be found on the WIT website and WIT Sport Scholarship Facebook page. 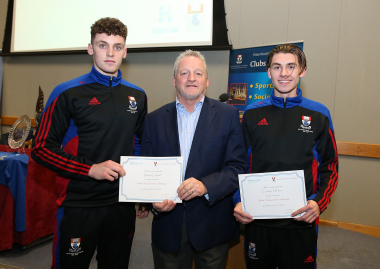