The annual festival of Colleges FAI Cup finals for the third level men's soccer clubs is heading to the South East where WIT will play host in early March.

Joe O’Brien, Colleges FAI Chairman, was present at the official announcement in Waterford Institute of Technology to confirm the finals of all five cup competitions, sponsored by Umbro Ireland, will be played over two days on Tuesday and Wednesday March 7 and 8.

The flagship Umbro Cup is set to take place in the Waterford RSC, the home of SSE Airtricity League club Waterford United, while the Umbro Plate ‘B’ Team Cup, Bob Eustace Cup and for the first time the Eustace Shield will all be played at the top class Carriganore Sports Complex which boasts four grass plus top class 3G astro turf playing pitches and expansive changing facilities.

“We are absolutely delighted that the finals are being held in Waterford IT. Waterford is a great football city and the soccer club in the institute reflects that” said O’Brien. “Robin Croke, Paul O’Brien and John Douglas all do great work here with the players on and off the pitch and the Waterford IT teams are always involved in the latter stages of our cups” added O’Brien.

Robin Croke explained that with the development of the WIT sports complex six years ago WIT has been very active in hosting third level college events as well as other local, national and international events in recent years.

“The Ladies Soccer Intervarsities Soccer finals were held there last April and various colleges and universities events including GAA, Rugby and Athletics competitions regularly take place in the Sports Complex in Carriganore so to have the men's soccer Colleges FAI Cup Finals there in March after a gap of 15 years is a great privilege for us,” pointed out Croke.

O’Brien expressed his delight that WIT had readily agreed to host this year’s finals.

“Over the past number of years we have gone back to having the Colleges FAI Cup Finals hosted in our member colleges. We find it a great experience for everyone involved as it gives the host college an opportunity to showcase their college facilities to a wider community. Ten teams plus supporters will come to Waterford in March and that should provide an added boost to the local economy,” explained O’Brien.

“This will be our 43rd finals and we have to thank our long time sponsors Umbro who have agreed to remain our main sponsor for the next five years. Our thanks also to Eamon Scott and the The Herald Striker for their continued support and coverage,” added O’Brien.

Manager Paul O’Brien will take the Waterford IT first team to IT Tallaght on Wednesday February 3 in a first round fixture as they begin their bid to reach the Umbro Cup finals on their home patch next March. 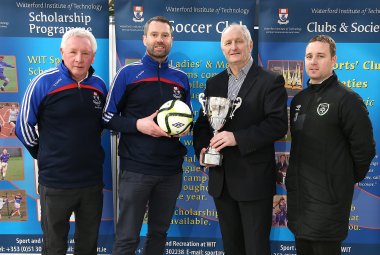