A team of WIT School of Engineering students had great success at the 2016 Chartered Institute of Building (CIOB) Student Challenge.

The event which was held at Limerick IT in February has been running since 2004 with WIT winning on three occasions and making second and third place at other times,

WIT's winning team comprised of Quantity Surveying student Dan Murphy and three Construction Management students David Phelan, Lorcan Hickey and Brook Cameron. The challenge involved a problem solving exercise based on a construction seneario. The team scored highly due to good teamwork, ability to identify the key success factors, preparing a detailled report and a clear presentation in front of the judges.

The team was mentored by Rodger Greene and John Carney.

The judges were Thomas Lineen of CIOB; Dermot Carey of the Construction Industry Federation and Michael Moran of LIT. Runners up were LIT and GMIT. The other teams who competed were Sligo IT, UL, CIT, IT Carlow and DIT. 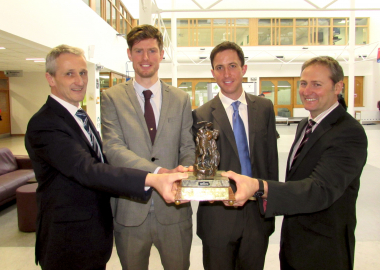