Dr Cordula Hansen, director of the research group for Design and Social Innovation (DASI)[1] in WIT, recently launched a new Virtual Reality exhibit at the library of Maynooth University.

The work entitled, “Emotional Data in a Smart City: Word Clouds D7” is one of a number of exhibits displayed at the Building City Dashboards Data Art Exhibition, as part of the Building City Dashboards project. The exhibit presents itself as a VR-based visualisation of ‘word clouds’ formed from the analysis of an open dataset of adult fiction titles issued and renewed in Dublin libraries during the month of November 2016.

When asked about the challenge presented by the project, Dr Hansen said, “The artist collaboration organised by Dr. Rob Kitchin and his team at the Building City Dashboards project was an exciting challenge, exploring how to make open data interesting to audiences. During the project, I wanted to leverage the immersive medium of VR to create a space for audiences to engage with data and information on affective terms, and to construct a personal experience of the information, its sources and its expression.”

The ‘word clouds’ are an information narrative of readers’ choices during the given month, derived from the book titles contained in the dataset. The virtual environment created as a home for these narratives was selected from the Art in Parks register for Dublin: The Blessington Street Basin, a little-known park developed near O’Connell Street, around a disused drinking water reservoir. The park also houses a number of Austin McQuinn sculptures evoking notions of mutability and temporality, reflected both in the virtual spaces of the VR world and the objects therein.

Positive consequences of VR use

Commenting on this use atypical use of VR technology, compared to gaming or simulation, Dr Hansen said, “In order for VR environments to become really significant to users, there may be a need to give space to the audience’s own building-dwelling-thinking activity, rather than just providing content to be consumed.”

“This argument informs the current strand of my work, which is leaving the idea of content creation, such as games and educational content, and concentrates on ambience and immersive interaction”, she continued.

Dr Hansen’s belief is that what people do in Virtual Reality, should have positive consequences for the real world, rather than being a locus for media consumption. 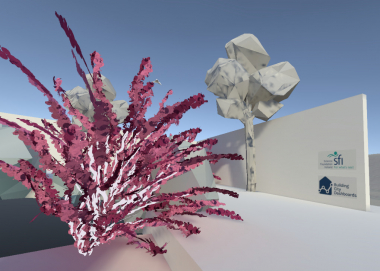