The WIT Futsal team are the 2015 Irish Universities & Third level colleges Futsal Champions and are in serious training throughout the summer in preparation for representing Ireland in the 2015 EUSA European Futsal Championships against 24 countries in Poznan, Poland from 2nd to 9th August 2015.

To compete in the competition is very expensive and the players assisted by WIT are fundraising to cover the costs and would greatly appreciate any donations from the public and businesses in Waterford that would like to financially help this Waterford team represent Ireland at the top of their sport in Europe. Futsal is the highly skilled, high speed and highly technical indoor soccer game played Worldwide and is rapidly being played in many new countries each year and it is becoming very popular within WIT and all third level Institutes.

The WIT team is training throughout the summer months under coaches Paul O’ Brien and John Douglas and the atmosphere among the players is very upbeat as they all await the start of the tournament. The players would really appreciate any sponsorship people and businesses can give.

Their names will be displayed in the main Atrium in the Entrance Hall of the WIT Main Campus over the next few weeks as they prepare to fly to Poznan.

You can contact Team coach John Douglas regarding sponsorship on 087-6799579 or you can donate direct to:

Any donations no matter how small would be much appreciated.

We wish the lads all the best! 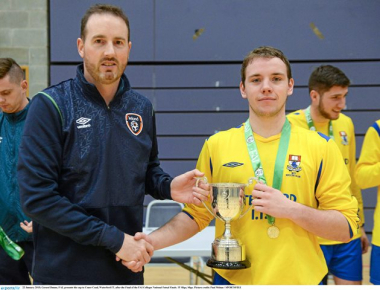