One of Ireland’s UN Youth Delegates for 2018/19 is Computer Forensics and Security graduate of WIT (2015) Jamie Moore from Dungarvan, Co Waterford

A WIT graduate, Jamie Moore from Dungarvan who was selected for prestigious role with the United Nations (UN) addressed the UN General Assembly on behalf of Ireland this week.

Jamie Moore , a WIT graduate, and Aisling O’Boyle a Trinity College Dublin graduate were selected to join Ireland’s delegation to the United Nations General Assembly in New York this autumn.

In the context of the 70th Anniversary of the Universal Declaration of Human Rights, as well as the Nelson Mandela Peace Summit and the 20th anniversary of the Good Friday Peace Agreement in Ireland, their speeches highlighted:

Representing the youth of Ireland

As one of Ireland’s UN Youth Delegates for 2018/19 Jamie will work closely with Ireland’s Permanent Mission to the UN and will have the opportunity to represent the youth of Ireland during sessions of the UN committee dealing with human rights issues.

The programme is run by the Department of Foreign Affairs and Trade, Irish Aid, and the National Youth Council of Ireland (NYCI), which represents organisations working with over 380,000 young people each year.

Valerie Duffy of the NYCI said: “The UN Youth Delegate Programme provides an exciting opportunity for young people in Ireland. After a competitive selection process which saw applications from all over the country, in Aisling and Jamie we are delighted to have selected two impressive young people who will work throughout 2018 and 2019 to highlight youth issues at local, national and global levels.”

Jamie is from Dungarvan, Co Waterford and attended Meánscoil San Nioclás in An Rinn, is a graduate of Waterford Institute of Technology, currently co-ordinates the Fingal Public Participation Network (PPN) in Fingal County Council and sits on the National PPN Advisory Group in the Department of Rural and Community Development.

Jamie has been passionate about youth participation and citizen empowerment from a young age and believes that participatory democracy needs to be strengthened across all Government structures. Jamie is heavily involved in empowering communities to participate in local and regional decision making structures. This is demonstrable throughout his personal and professional life and in particular through his work with Comhairlí na nÓg and PPNs. This has involved working on a wide range of issues such as Mental Health, the Environment, Poverty, Housing, Strategic Infrastructure and the UN Sustainable Development Goals.

Jamie believes the eradication of poverty and inequalities can be achieved through lifelong learning and the focused empowerment of young people who find themselves growing up in these situations. This is fundamental in creating an equitable society for young people and young families. Jamie also believes in the need to build strong and trustworthy institutions with the upmost integrity, particularly in the provision and delivery of public services and peacekeeping.

Jamie has previously participated in activities such as the EU Comenius Programme, EIL Ireland Hong Kong Youth Exchange, Dáil na nÓg, Scouting Ireland and his local School Completion Programme. Jamie is an alumnus of the Washington Ireland Program and sits on the board of South Dublin County Volunteer Centre. Jamie's voluntary and professional work has been acknowledged through a Gold Gaisce Award, All Island Pride of Place Award and Excellence in Local Government Award.

The delegates will be engaging in extensive consultation throughout the year. Those holding youth events in Ireland can contact [email protected] to invite the Irish UN Youth Delegates to attend. The delegates will also address a Youth Summit as part of One World Week organised by the NYCI on November 21st 2018. 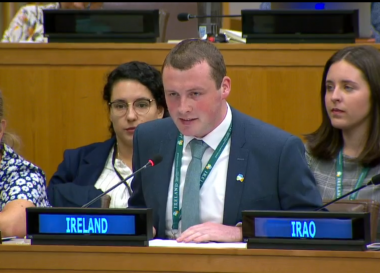