The first female to receive the overall WLR FM/Granville Hotel GAA Award, in 2015 she won the Ashbourne Cup All Star Award to top off her time in WIT

WIT graduate and camogie star Patricia Jackman is a name currently on the tip of every GAA player's tongue. The Gaultier native is excelling both on and off the field as she continues to grab every accolade available with her hard work and excellent organisational skills. A recent graduate of the Institute, Patricia is now based in UK where she is completing a PhD in the University of Lincoln.

On Saturday, 9 January, Patricia created another piece of history when she became the first female to receive the overall WLR FM/Granville Hotel GAA Award here in Waterford. This award was in recognition for her performances on the pitch for both her club, her college and her county in 2015 and nobody can question Jackman’s commitment as she often travels back and forward between the UK and Waterford in any particular week in order to help realise her own and her teams goals.

Last February was the beginning of her wonderful journey in 2015 as she helped WIT to Ashbourne success, her fifth title in 6 years, after victory over UL in DCU. Patricia’s excellent displays throughout the competition saw her named “Player of the Tournament” for the second time while also picking up an Ashbourne Cup “All Star” award to top off her time in WIT.

In April, Jackman helped Waterford lift the Division 2 league title as they overcame Laois in a tough encounter. This success story continued and in August, high on the Annavera Mountain range, the exceptional Jackman claimed her 7th Poc Fada title after an epic battle with her opponents. This sports star's confidence was growing as she was setting the GAA world alight. Her performances for Waterford helped them reach senior status after they overcame a dogged Kildare side in the Intermediate All Ireland Final in September.

After producing some fine displays throughout the season, Jackman was rewarded when she was voted the “Player’s Player of the Year” as well as a “Soaring Star” award at the Camogie Association’s annual awards ceremony in November. The WLR FM/Granville Hotel GAA Award capped off an extraordinary year for the former WIT student; one which she will remember throughout her sporting career. No doubt Patricia’s star will continue to rise and we all wish her the best of luck in 2016, both on and off the field of play. 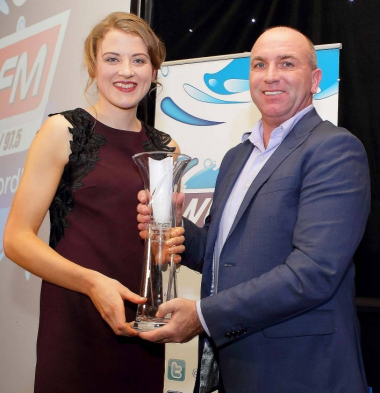