Originally founded by a group of friends who met while studying in WIT, the core of the current band and crew owe their success to skills learned at WIT

An Irish band which has its foundations in Waterford Institute of Technology (WIT) has received a prestigious award.

King Kong Company, a multi award winning Irish band that has managed to build a huge cult following over the last seven years has received The Bram Stoker Award from The Philosophical Society in Trinity College Dublin.

“Every year The Philosophical Society elects a group of exemplary individuals to recognise their outstanding contributions to entertainment, the arts, discourse, politics and science. In recent years Archbishop Desmond Tutu, Dame Helen Mirren, Martin Scorsese, Vice President Joe Biden, Nancy Pelosi, Al Pacino and Chancellor Angela Merkel have accepted awards. King Kong Company's name has now been added to this list,” explains Mark Graham, a lecturer on the BA (Hons) in Music course in WIT who is a band member.

The award was presented as part of the University Series- a series focused on individuals and groups who make a difference to students across Ireland. In a Facebook post the organisers gave some background to the award. "King Kong Company are an electronica dance band who met and originated in Waterford institute of Technology. They originally began with the goal of releasing one music video a month and through the platform of social media they accumulated a wide audience. Since then they have played festivals such as Electric Picnic, Castlepalooza, Body and Soul, Barndance and many more. The Phil are delighted to award such a revolutionary group and to share their thoughts on the Irish music scene."

Originally founded by a group of friends who met while studying in WIT, the core of the current band and its crew owe their success to skills learned in their respective disciplines at WIT, says Graham.

Both Alan Aylward (guitar) and Mark White (bass guitar) are Design graduates, and they are responsible for contributing to KKC's visual presence. Colin Hoye (trumpet and keys) and Tom Stapleton (keys) are graduates of the BA (Hons) in Music course. Mark Graham (drums, vocals, trombone) is the only member of the band who isn't a WIT graduate (MA in Music and Media Technology from Trinity College Dublin), but Mark is now a lecturer on the BA (Hons) in Music course in WIT.

It's not only the musical members of King Kong Company that have their roots in WIT. John Loftus is responsible for the bulk of the videos released by the band and he creates the live visuals for every KKC show. John is a BA (Hons) in Design (Visual Communications) graduate. One of the reasons that King Kong Company have managed to gain such a huge following is through their online presence, and this is the work of Luke Abbot, a Masters of Business in Marketing graduate. Sue O'Neill is a regular guest performer with the band and she is also a BA (Hons) Music graduate.

This band are performing at the highest possible level both nationally and internationally. Their headline show in The Olympia on October 13th is on it's way to becoming a fourth sold out Dublin gig in a row for the band. They've received awards for their videos and they've been crowned the best live act in Ireland.

“The real success in this story for WIT isn't awards or outstanding performances, it's what these graduates bring to the region that they have decided to make their home,” says Graham.

From all of the King Kong Company crew listed above, only two of them are Waterford natives. The other members are from Tipperary, Westmeath, Kilkenny, Dublin and Clare. “Those individuals chose to come and study in the Department of Creative and Performing Arts in Waterford Institute of Technology, but maybe more important is that most of them chose to stay in Waterford after they graduated. They live in Waterford, they work in Waterford and they are raising their families in Waterford. Not only are these graduates contributing to the cultural capital of Ireland, they have woven themselves into the social fabric of Waterford, and that's something WIT can be very proud of.”

King Kong Company packed 13,000 fans into the Electric Arena at Electric Picnic this year, as well as headlining a host of other Irish festivals. KKC have also been stealing the show at festivals all around Europe; a particular highlight being their performance at Glastonbury last year. They performed at a session in Áras an Uactarain at the behest of President Higgins and RTE have booked them in for a television appearance in December. They're doing pretty well for a band that decided that they would perform for one night only in Waterford... seven years ago. 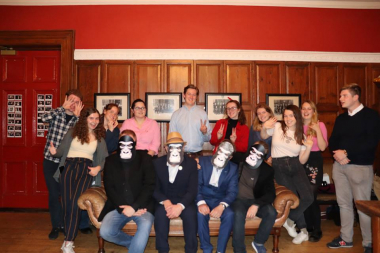