The Department of Nursing and Health Care at WIT hosted the Sigma Omega Epsilon at-Large Chapter Summer Class at the institute’s Carriganore Campus earlier in June.

The Sigma International Nursing Society has more than 135,000 members in more than 90 countries who demonstrate excellence in scholarship and exhibit exceptional achievements in nursing.

The Irish chapter Omega Epsilon at-Large was established in 2018 and currently has over 80 members.

The event was really well attended, both in person and online. Attendees including international guests from Sigma chapters from Georgia, USA who were visiting WIT as part of the Summer School initiative as well as a large number of nurses from services in the South East of Ireland.

The event was also live streamed around the world and we were joined online from Brussels by Dr Elizabeth Weathers, President of Omega Epsilon at-Large and Professor Dianne Cooney- Miner, Head of the Golisano Institute for Developmental Disabilities in Rochester, New York.

The keynote speakers on the day were Professor John Nolan and Ms Laura Ryan.

Professor Nolan discussed Targeted Nutrition for the ageing population: Implications for Age-related Macular Degenerating and Alzheimer’s disease. This timely topic generated a lively round of questioning among the nursing audience given the changing demographic of the Irish population.

Ms Laura Ryan, a 16 year old Transition Year student discussed her patient journey through the Irish healthcare system and the challenges that this presented. This inspirational student encouraged nurses to invoke a person centred approach in the care they provide.

Professor John Wells, Dean of the School of Health Sciences and Dr Sara Kennedy, Head of the Department of Nursing and Health Care at WIT were the hosts for the event and introduced the key note speakers.

To close the event, Dr Geraldina Harnett, Head of Department of Nursing and Health Care Sciences at the Institute of Technology Tralee gave the closing address. 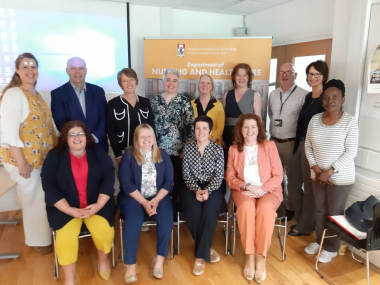