It's envisaged students will replicate the learnings from the event into an offering for tourists in Ireland, or abroad around St Patrick's Day

Waterford Institute of Technology recently hosted a half day conference to fill in the knowledge gap and shine a light on what it really means to be Irish.

“On St Patrick’s Day, many people around the world celebrate being Irish, but many have no idea about the culture behind it,” says Jacinta Greene Beatty, a lecturer in Hospitality Management, the organiser of the event,

A model programme ‘Be Irish for a day’ was launched which will be rolled out on 15 March 2022 when WIT students get experience of the model programme firsthand which they could replicate and enhance in their future careers.

She hopes that the students will take this knowledge and spread it around the world as they embark on their careers e.g. as part of our tourist’s itinerary in Ireland or abroad or a day that can take place on St Patrick’s Day.

“This is what will be so important in the future for competitive tourism market as the Irish hospitality and culture is what sets us apart in a globally and increasingly digitalized tourism and hospitality market,” she said.

"The lighting of a fire"

The event also represented what teaching should be as WB Yeats who wisely opined ‘Education is not be the filling of a pail but the lighting of a fire.’ WIT Business Lecturer and Balloonist Joe Daly arrived bright and early with his hot air balloon and basket, but due to the bad weather Joe set up the basket and fire as part of the photo shoot at the entrance of Tourism and Leisure Building creating a buzz and attention for the launch.

Liam O’ Shea (Lecturer in Engineering and Annette Hennessey Student in Music at (WIT) collaborated with Dave’s List and WIT Traditional Music Club respectively and performed traditional Irish music at 9 am for the inaugural launch of 'Be Irish for a day'.

Edward Hayden acknowledged the huge role Irish farmers play in Irish food and praised his local farmer Vincent Grace at Riverside Side farm for his mystery box of produce which encourages his customers to use what is in season, fresh, affordable and saves on air miles.

Philip Cremin pointed out that the shamrock is made up of three hearts symbolizing love, collaboration and relationships. "Patrick's contribution through his use of the shamrock proved enlightening as it visualised an understanding of the living God in terms of relationships and love," he said.

Richard Finan from Castlerea, Roscommon said he was delighted to meet the students in person and was delighted to be able to collaborate with WIT during the pandemic in order to enhance lectures by contributing albeit online. Joe Fenwick from NUIG has just published a book on Rathra, a huge broze age ceremonial enclosure to the west of the Rathroghan complex close to Castlerea in County Roscommon, which Richard also spoke about.

Gerry Cullinan acknowledged the recognition that ladies football in GAA is now getting and was fitting to mention this on the International Women’s Day.

WIT graduate Mark Dunne remarked that it his team at Mount Juliet Estate that are responsible for their recent top position on the Smith Travel Research report (STR).

Ivona Carr stressed the importance of collaboration between all the operators in tourism and hospitality and the stakeholders and that we all need to have the same goal creating clusters and attracting tourists to off the beaten track areas developing these places also.

Dr Arthur Broomfield read Planting the Spuds from his most recent publication ‘Ireland Calling’. WIT student Zara Brown spoke about tea and the Irish, and also read a piece about Tea in Ireland from Arthur’s book. Student Hillary Power collated some primary research online and shared the results of what it means to be Irish and what the social energizers are looking for.

Students had an opportunity to express what being Irish meant to them, thoughts they could reflect on when creating their own 'Be Irish for a Day' event.

Laura Clavel from France shared that in her childhood she was introduced to Ireland through the song Les Lacs du Connemara, (The Lakes of Connemara) which her Grandmother used to play to her.

For other students the majority who were born outside of Ireland said that Ireland meant: safety, an opportunity for education, felt welcome, first family, home, enjoy the crack, the pride and hospitality is central strength of being Irish whether coming into a house and being offered a cup of tea, to visitors coming into Ireland and feeling part and a sense of belonging to the Ireland and the Irish community.

It was very evident from the day that “There is no one version of Irishness,” say Greene Beatty.

"Our strength comes from each other, everyone bringing their own talents, ideas and personalities which together are powerful. Being Irish provides a sense of belonging and, in the darkest of times, it gives us a feeling of hope as we have experienced looking out for each other during a pandemic and now in our response to Ukraine war, the strength of the Irish is seen in our alumni and diaspora abroad who despite how long they have been living abroad they still talk about ‘going home’ for a holiday or if you ask them where they are from many will talk about their Irish connection. We see that, in the pride and respect for our Irish sports stars, successful politicians abroad - the US good is an example, corporate leaders, musicians, dancers, chefs globally known for their talents - so many examples across the world.”

Greene Beatty thanked all who contributed to and collaborated on the day and made it possible. She complimented the students: Laura Clavel, Melanie Fofiu, Saafi Mahamud, Paul Perejan, Hillary Power, Vilte Zaikauskaite, Zara Browne, Chloe Walshe, Daniels Kuda who had worked so hard to organise the event and who had learnt so much by doing.

Brendan Kennelly the poet perfectly summarises what Ireland in his poem “The Essence of what Ireland is”: "Ireland literally gets in under your skin, steals into your dreaming mind, taking possession of it like a memory of love or a spontaneous kindness from stranger or friend." 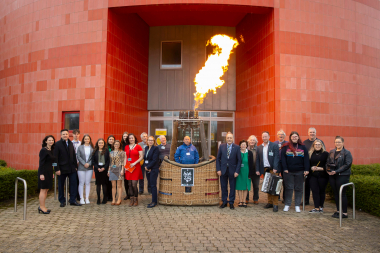 “On St Patrick’s Day, many people around the world celebrate being Irish, but many have no idea about the culture behind it"