Dr Niamh Murphy, Senior Lecturer in the Department of Sport and Exercise Science at Waterford Institute of Technology, has successfully managed the Irish Women’s U23 team to a silver medal at the European Cross-Country Championships in Lisbon, Portugal.

The team was led home by Stephanie Cotter (3rd overall), followed by Eilish (9th) and Roisin (17th) Flanagan. Highly regarded nationally in relation to physical activity and health promotion research and policy development, Niamh is programme leader for the BSc (Hons) in Public Health and Health Promotion. She also has a strong background in competitive athletics.

She is a former international athlete and competed for Ireland in the World Cross-Country Championships. Along with her husband, Noel Richardson, she coaches an elite endurance squad with Kilkenny City Harriers, four of whom were competing in Lisbon. Niamh was quietly hopeful last week that the team would medal and is delighted with the result.

It was a double celebration for the family out in Lisbon. Her daughter, Aoibhe Richardson, a student at the University of California, was on the Irish Senior Women’s Team that placed 2nd in the team event. Aoibhe was the second Irish athlete home in the race, placing 17th overall, behind Fionnuala McCormack (4th) and just ahead of Ciara Mageean (20th). 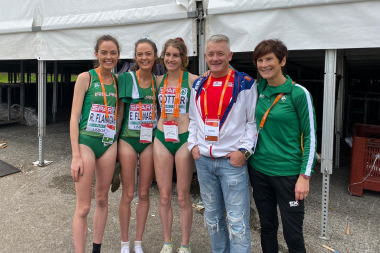 Niamh is pictured (far right) after the race in Lisbon along with the scoring members of her Irish team, Roisin Flanagan, Eilish Flanagan and Stephanie Cotter along with Gert Ingebritsen, coach and father of the famous Norwegian Ingebritsen brothers Jakob, Filip and Henrik.