A vital insight into the music industry featuring Ireland’s top professionals has been launched by Mark Graham, a lecturer in the Department of Creative and Performing Arts at WIT

The Irish Music Industry Podcast was recently launched and provides a vital insight into the music industry and what people can expect from their chosen career.

Produced by Mark G of King Kong Company aka WIT lecturer Mark Graham, The Irish Music Industry Podcast is a must listen for both people who want to break into the industry and seasoned professionals who want to learn more about other areas of the music sector.

Speaking about the brand new podcast Graham said: “There is something for everyone, with episodes tailored to appeal to music industry professionals, those hoping to get a start in the sector and those interested in sussing out what goes on behind and around music in Ireland today”.

The podcast has sought out professionals from a multitude of disciplines to offer some advice and discuss how they carve out their own space within the sector. Each episode of The Irish Music Industry Podcast will see Graham interviewing some of Ireland’s top music industry professionals and pick apart the mechanism of the Irish music sector in an effort to understand what makes it tick. From well-worn road warriors to eager newbies, all stories, advice, wisdom and occasional tales of woe come straight from the horse’s mouth.

The spark that lit the touchpaper on this podcast came from Mark Graham’s experience within third level education and from working within the music sector itself. “There was a slow burning realisation that many prospective music industry professionals aren’t privy to a full and frank picture of what to expect from their chosen career”.

He maintains that “It’s not just people starting out in the music business either. Many of us who’ve been doing this for years still aren’t clued in about lots of different aspects of the industry. When our band began to enjoy a modest amount of success a few years ago, we were signing contracts with management, record labels, merch companies and a host of other concerns, and we didn’t have a clue. In 2017 we turned over more than €100K in performance fees, but none of us got paid that year. In 2018 we sold out The Olympia Theatre and that gig ran at a loss due to decisions made by ourselves. We’ve been making music most of our lives, but there’s so much we don’t know about all the other stuff.”

The first four episodes of The Irish Music Industry Podcasts are available now on iTunes, Android and the usual digital sources or you can visit timi.ie to download/stream the podcasts. The remaining 14 episodes from season one will be released weekly and the accompanying articles, info and original illustrations (by Barry Haughey - @_hawkie on Instagram) can also be found at timi.ie. The Irish Music Industry Podcast is supported by IMRO.

Mark G is a lecturer in the Department of Creative and Performing Arts at Waterford Institute of Technology by day, drummer, vocalist and trombonist with King Kong Company by night. Mark has previously worked for Today FM and RTE Radio. His first book, A Year of Festivals in Ireland, documented his quest to attend three Irish festivals per week for an entire year. He ended up attending three Irish festivals per week for three years, while writing his Festival Fit column for The Irish Times. A Year of Festivals in Ireland won Travel Book of the Year at the Travel Writers Awards 2015. The associated Year of Festivals blog won Best Popular Culture Blog at the Irish Blog Awards. 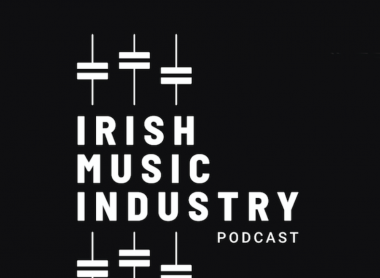 “There is something for everyone, with episodes tailored to appeal to music industry professionals, those hoping to get a start in the sector and those interested in sussing out what goes on behind and around music in Ireland today”.