The Island of Evenings, the first feature length drama from WIT lecturer Garry Miley, made its premiere in Garter Lane, Waterford, on Wednesday, 28 November.

The films tell the story of a man whose depression is so crippling he can barely function. But a chance meeting with a therapist (with unconventional methods) on the internet sets his life off in a direction he wasn't expecting.

“I really wanted to make a film about depression in men but I didn't want it to be like anything that's been said about the subject before. At least not in Ireland,” says writer/director Garry Miley, who lectures in the Department of Architecture. “There's been a lot of talk about depression in the past few years and it’s all very welcome. But I wanted to see if there's a way to say something fresh about it, a way to move the conversation forward.”

At the start of the film the main character, Brendan Gleeson (played by David O'Neill), is about to pull the trigger to end his life. But when he finds he hasn't the courage to commit the act, he searches for help online. At first the search only serves to make Brendan feel more miserable than he was to begin with. But then he comes across Gus (Dublin Oldschool's Liam Heslin) who suggests that he take a crash course in philosophy. Thinking he might be wasting his time and expecting to be bored out of his mind, Brendan reluctantly goes along with the idea. Naturally, the exercise doesn't turn out the way he expects and very soon he finds himself seeing life in a completely different way. Brendan finds a new reason to live and film ends on an uplifting note.

The Island Of Evenings was filmed on a two week schedule on a budget of less than fifteen thousand euros. 'We really wanted to make the film, so we just did whatever we had to do to get it done. Technically, we had to cut a lot of corners, but it was worth it in the end because we wanted to tell the story.' says Miley. ‘I really enjoy making films. It’s very creative way to spend your time. And the intensity of working with a team of creative people is always exciting. But it’s not as exciting as lecturing – teaching architecture is the best job in the world!’ 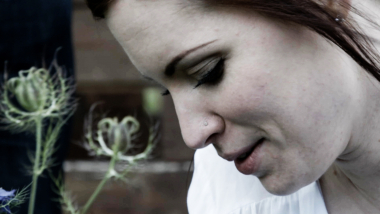 Christina Murray as Katie in The Island of Evenings