WIT Health Sciences lecturer John Wells joined a panel of professors from around the world at Lamar University, Texas, to discuss Brexit at length

On June 23, 2016, the United Kingdom voted to leave the European Union. Although this was almost half a year ago, the decision was not to be forgotten.

As part of International Education Week at Lamar University, the Reaud Administration Building’s Executive Event Room welcomed a panel of professors from around the world on Tuesday.

While panelists offered their thoughts on the British exit, “Brexit,” comparisons were also made to the United States’ division over their new president-elect, Donald Trump.

Waterford Institute of Technology (WIT) health science professor John Wells said that the motivation for the Brexit referendum was politically-based.

“If you actually conducted a survey, EU membership ranked ninth in terms of concerns,” Wells said. “It wasn’t the number one concern for people.

Wells said what really mattered to people within the UK concentrated on the country’s economy. 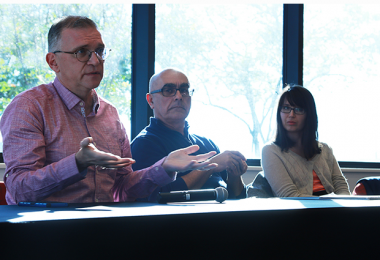