Music School lecturer and conductor Niall Crowley was recently invited to work at Cornell University with their historic Men's Glee Club and high school boys from across New York State. Crowley gave a number of workshops which culminated with a concert at the Ivy-League university's Sage Chapel.

The Cornell Glee Cub was founded a little over a month after the university opened its doors in 1868, following in the tradition of other men's choruses in Harvard and Princeton etc. Today, the Cornell University Glee Club is recognised as one of the premier collegiate ensembles in the United States. Over their long history the group has performed to hundreds of thousands of people and performed in cities across the globe including Taipei and Moscow. The choir have recently returned from a three-week tour of Mexico and Guatemala.

Crowley works with two of the youth choirs within the WIT Music School's Choral Programme, has been a long-standing conductor with the National Youth Choirs of Great Britain and also featured as a mentor on RTE's documentary series 'The High Hopes Choir'.

Whilst in New York he also visited the internationally acclaimed Young Peoples Chorus of New York, who run a programme similar to that available at the WIT Music School. 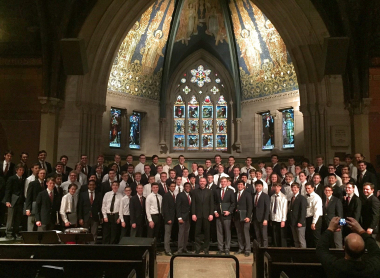