The Department of Creative and Performing Arts BA (Honours) Music will celebrate its annual Christmas concert on Thursday, 1 December in the College Street Chapel at 7 pm.  People of Waterford are invited to come along and listen to a night of music and song from the most promising musicians in the region. Entrance is free and donations will be taken in aid of Focus Ireland.  Students in WIT’s music school and undergraduate students on the music degree will showcase their talent, performing a wide-ranging programme from Tchaikovsky to a gypsy jazz arrangement of ‘Pure Imagination’ in tribute to Gene Wilder’s Willy Wonka. There will be performances from the WIT orchestra and ensembles, including traditional, guitar, jazz and the chamber choir.

The WIT traditional ensemble directed by uileann piper Dr Jimmy O’Brien Moran and fiddle player Bridget O’Connell will play a selection of polkas and reels as well as some Newfoundland tunes.

The WIT guitar ensemble led by Irish guitar virtuoso Michael O’Toole is an exciting and alternative approach to instrumental music. Performing their take on contemporary music, their eclectic repertoire creates a unique soundscape that is an unmissable experience for all music lovers.

The WIT Chamber Choir, directed by Bridget Knowles, and accompanied by Dr Marian Ingoldsby will perform the Lamb by Tavener, Glow by Eric Whitacre and This Little Babe by Britten.

The WIT orchestra comprises over forty musicians including undergraduates from the BA (Hons) Music and students of the WIT Music School, under the directorship of Stephen Mackey.

The WIT jazz ensemble plays a collection of jazz compositions from a variety of styles including swing, bebop, Latin and modern. It is led by accomplished composer Philip Collins who brings his own style and influence to this group through his arrangement of standards from the repertoire.   They will perform ‘Another Star’ by Stevie Wonder with vocalist Kayleigh Quinlan, ‘How High the Moon’ by Morgan Lewis with vocalist Hannah Malone and ‘Just the way you are’ by Billy Joel with vocalist Kayleigh Quinlan.

The concert is organised, promoted and performed by the BA (Honours) Music students. “The concert is a must for anyone considering studying music at third level.  It is a family friendly event, with an early start and great variety in the music played.  The concert presents a wonderful opportunity to listen to the fruits of students’ hard work over weeks of rehearsals,” said Dr Hazel Farrell, Programme Leader on the BA (Hons) Music. 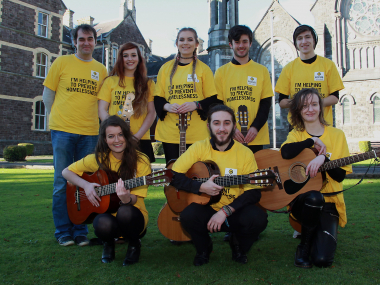