The guide contains Ireland’s only league table that measures the performance of all 19 multi-faculty third-level institutions. The full rankings will be revealed in a special 16-page supplement which will be published free with The Sunday Times this Sunday, November 1, with a fully searchable website and extended institutional profiles at thesundaytimes.ie/gooduniversityguide for subscribers to The Times and The Sunday Times.

Alastair McCall, editor of The Sunday Times Good University Guide, said “WIT has celebrated its 50th birthday this year by driving forward with plans that will eventually see its name disappear, emerging as a technological university that will have a big impact on the southeast region and far beyond. That can only be good news for the regional economy and for the students who are lucky enough to study here. WIT is already a big third level player and its future development as a TU will only fuel that further.

“WIT has long been among the most dynamic of the institutes of technology, synchronised with the needs of business and providing academic and sporting facilities that stand with the best. Our award acknowledges its contribution to date and is a vote of confidence in its ambitious plans for the future.”

Prof Willie Donnelly, President of WIT said: “We are honoured that the institute has been awarded this prestigious accolade as we mark our 50th anniversary. Over the last 50 years we have created opportunities for students to study at higher certificate right through to PhD and post-doctorate level, an enviable research eco-system, and are strongly connected into our community, regionally, nationally and internationally.

“The title Institute of Technology of the Year 2021 is a validation of our commitment to the south east region and our unique innovation culture which sets us apart and makes us the successful institute we are today. It is also fitting that we are now in the advanced stages of establishing a technological university with our partners IT Carlow.”

While the full detail which led to WIT’s title of The Sunday Times Institute of Technology of the Year 2021 will be revealed on Sunday, 1 November, some of the following items were highlighted by the editor of The Sunday Times Good University Guide.

Focus on impact of pandemic

This year’s Good University Guide also reports on the dramatic changes on campus since the advent of the pandemic and assesses how much college life might have been changed forever with a move towards greater online delivery of courses that might not be reversed when the pandemic is over.

Alastair McCall, editor of The Sunday Times Good University Guide, said: “The genie is now out of the bottle as far as online delivery of courses is concerned. While institutions have been delivering courses flexibly for a number of years to a greater or lesser extent, we can now expect to see this become the norm going forward. While the social side of student life will return to something approximating to the traditional college experience in future years, the pandemic is likely to change the way students learn for good.”

The Sunday Times Good University Guide is now in its 19th year of publication. It provides the definitive rankings for Irish third-level institutions, together with profiles of each institution and a view from students of what it is like to study there. It also contains the first full listing of 2021 honours degree courses and the first-round entry points needed to access these courses from the recently-completed 2020 admissions cycle.

There is a tablet edition, plus extended online coverage, at www.thesundaytimes.ie/gooduniversityguide, which features fully searchable tables on each of the eight measures on which institutions are ranked, together with extended profiles of each. It also contains full access to the newspaper’s UK university guide published on September 20. 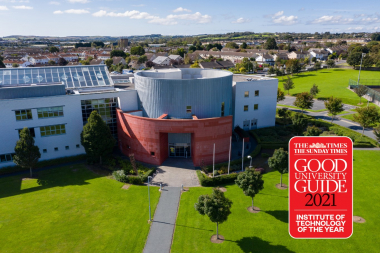