Waterford Institute of Technology (WIT) were crowned winners of the 4th Annual Great Agri-Food debate, organised by Dawn Meats and McDonald’s Ireland, as students from seven third-level colleges around Ireland gathered once again in WIT to discuss some of the most topical issues facing the industry.

The debate took place at the WIT Arena and this is the third year that WIT participated. The 2019 WIT Great Agri-Food debate team comprises of six students from the Department of Science’s Agriculture and Agricultural Science programmes. They are: Michael Doughan, Shane Geraghty, Emma McCormack, Danielle Mulligan, Michael Martin, Alan McCarthy. WIT’s Michael Martin was the winner of the Best Speaker Prize in the final. Simon Lanigan, UCD and Meg Minihane were awarded Best Speaker in the two semifinal debates.

The inaugural competition took place between two UCD teams in 2016, rising this year to seven colleges from around Ireland. Over two days, teams from WIT, University College Dublin (UCD), University College Cork (UCC), Cork Institute of Technology; Queens University Belfast; IT Tralee; and CAFRE, Loughry Campus debated motions including “Farming in Ireland Should be Scaled Back to Meet Climate Change Commitments”; ”Plastic Packaging is a scourge of the food supply chain” and “The World Can’t Feed 10bn People and prevent catastrophic climate change”.

The event culminated in a well fought, heated debate between home team WIT and CAFRE on the motion “Vegan diets are better for people and planet”.

CAFRE argued that far from being a passing trend, veganism has been around since the 1800s and a vegan diet can reduce heart disease and cholesterol as well as helping to combat Ireland’s obesity problem, reducing the cost to the national health system. They reasoned that the planet simply does not have the ability to sustain meat-based diets, and we must react and innovate to tackle the challenge.

Opposing the motion, WIT argued that the “epidemic” of veganism poses a direct threat to farming families and to wider economic stability. They reasoned that products eaten by vegans are more reliant on heavy machinery to produce and often accumulate a very significant carbon footprint, citing the example of avocados. In addition to the economic and environmental impact, the WIT team also insisted that no vegan diet can provide sufficient levels of vitamin B12.

Commenting after the debate, Niall Browne, CEO Dawn Meats said: “Every year at this debate, there are new and complex motions that deserve that attention of our industry. Again this year, we also have a strong cohort of students whose insights, intelligence and enthusiasm make me really positive about the future of Irish agriculture. Hearty congratulations to the winning team, and my thanks to our partners McDonald’s and all the participants, judges and moderators for making this event such a success.”

Elaine Sterio, McDonald’s UK & Ireland, said: “It’s wonderful to see this event grow year on year. McDonald’s in Ireland works in close partnership with quality producers the length and breadth of the country and through this debate, we are also able to engage with the next generation of farmer suppliers. The topic of changing tastes is particularly pertinent, as McDonald’s continues to innovate its offering in Irish restaurants.”

Eleanor Kent, the Assistant Head of the Department of Science at WIT is a member of WIT’s mentoring team which also includes lecturers Rachel O’Dowd, Michael Breen and Tony Woodcock. She notes the long-term career value of participating on the debating team for students.

“This is the first win for WIT at the Great Agri-food debate, and we have to recognise the foundations laid by the two previous teams that participated and promoted the event in WIT. Apart from the final six selected to represent WIT there were a number of other students who were interested and we look forward to seeing the levels of interest grow. We would like to thanks Dawn Meats and McDonald’s for giving us the opportunity to be involved in this annual event which is a truly wonderful opportunity for third level students. Debating at such a high profile event gives our students exposure to industry and graduate opportunities. The future employment prospects of our students was evident on the day from remarks made by employers.”

UCD and CAFRE faced off in the first semifinal on “Farming in Ireland Should be Scaled Back to Meet Climate Change Commitments”, with UCD arguing that while farming has become the “whipping boy” in the debate on climate change, in reality, “aviation is the red meat in this greenhouse gas sandwich”. They argued that farmers are the solution, not the problem. CAFRE countered that climate change initiatives are not working and we have the opportunity to take action drawing on practical, innovative solutions that reduce costs and impact.

UCC and WIT faced off in the second semifinal on “Farm supports drive sustainable agriculture”. Proposing, UCC warned that doing away with farm supports means doing away with the family farm, with a significant impact on rural communities. WIT countered that if a subsidy is needed to make an enterprise sustainable, then by its nature it’s not sustainable. Further they argued that subsidies are preventing sustainable agriculture, removing the need to adapt and diversify. 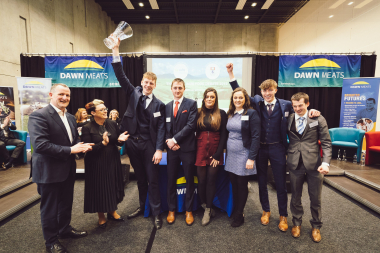