The Centre for Health Behaviour Research at WIT was part of a research team which recently published the first all island study of sport and physical activity participation, preferences and provision.

The WIT team, led by Dr Niamh Murphy and research assistant Neal Byrne led the survey phase of the project, which collected data from a representative random sample of over 8,000 students across the island of Ireland.

Commissioned by Student Sport Ireland and funded by Sport Ireland and Sport Northern Ireland, it is the largest of its kind worldwide. It adopted a unique methodology which involved data collection by ‘champions’ in each of the participating 33 institutions.

The research team, which included researchers from Dublin City University, the University of Ulster and the University of Limerick, have provided individual reports to each of the participating institutions to allow them to inform their future policy on investment in sport and physical activity over the coming years

Overall it found that 64% of students are highly active and are more active than the general population across comparable age groups.

Dr Niamh Murphy said “This unique study provides a rich source of information for researchers, policymakers, and third level institutions. We hope it will help guide how we invest in student physical activity and ultimately student health in the years to come. It helps us to understand how best to encourage those not currently engaged in college activities to participate and where we need to target our efforts.”

WIT’s involvement in this work builds upon the mission of the Department of Health Sport and Exercise Science, and the Centre for Health Behaviour Research, she added.

“We have built an excellent reputation in policy relevant work of this type such as the GAA Healthy Club project, work in the area of mass events, evaluating the impact of investment in smarter travel, and the national Men on the Move programme. I believe collaboration of this type, both nationally and internationally, is fundamental in improving population physical activity and WIT is playing a pivotal role. ”

While undertaking the Student Physical Activity and Sport Research, it was determined that 64% of third level students in the country are highly active, and include exercise in their daily routine.

The year-long research revealed that 70% of participants are physically active, and take part in activities such as cardio classes, weight training, circuit training and exercise to music, such as Zumba classes.

he study proved that just 40% of the students admitted to commuting to college in the form of walking or cycling.

The survey illuminated gender differences, highlighting male students as the more active, with 78% of them considering themselves highly active, in comparison to 58% of female students.

Popular sports to participate in, included Gaelic football, soccer, running and walking, while 1 in 7 students are a member of a sports club. Social factors played a major role in determining whether or not a student took part in physical activity, with more than half admitting they would not participate, “if they did not have anyone to do physical activity with.”

The most common physical activity to take part in outside of college were exercises such as walking and running.

Another figure proved that 6,700 scholarships were awarded to students between the years of 2009 to 2013, and college nationwide spend approximately €11m per annum through investment of sport and physical activity. 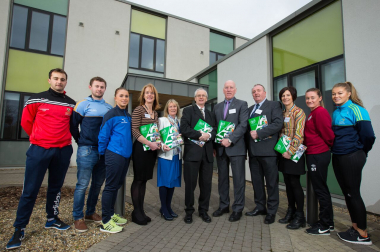 Pictured at the launch is Niamh Murphy, WIT, third from right