The patient-friendly techniques deliver a targeted dose of drug to the skin over prolonged periods with the potential added benefit of having fewer side effects for patients.

The techniques were developed as part of the €838,000 HIPODERM project, led by PMBRC researchers at WIT in collaboration with partners in Cardiff University; An-eX Analytical Services Ltd, Cardiff, Wales; and EirGen Pharma, Waterford.

The major topic discussed at the event was the strategies developed for delivering pharmaceuticals into and through the skin with the aid of micro-needles and transdermal patches . Micro-needles are arrays of tiny short needles designed to pierce the outer barrier of the skin but not penetrate deep enough to reach pain receptors, thereby facilitating delivery of pharmaceuticals, vaccines and peptides into and through the skin.

According to HIPODERM project Manager, Dr Mike Kinsella, “The techniques we developed with our partners have the potential to deliver the drug to the required site in the skin non-invasively and with minimal side effects which brings obvious benefits for the patient.”

Dr Kinsella goes on to say, “The project was a truly collaborative one with each partner bringing specialist skills to the research. Events such as these also give us an opportunity to network with our peers in academia and industry and allow us to explore further opportunities for research.”

The inter-sectorial seminar and network event "Challenges in Dermal Formulation and Analysis" was hosted by the PMBRC to disseminate the key findings of the HIPODERM project. The event included speakers from Cardiff University, Wales, An-eX Analytical, Wales, Queens University Belfast, University College Cork, Xeolas Pharmaceuticals and WIT-based researchers on the project as well as attendees from Enterprise Ireland and other academic and industrial organisations.

HIPODERM, which was nominated for a Pharma Industry Award in 2014, is an FP7 funded project under the Marie Curie Actions IAPP (Industry and Academia Partnership and Pathways) Scheme. To date, the project has generated three invention disclosures, nine international conference proceedings and a number of academic publications currently in press. For more on the project, see here. 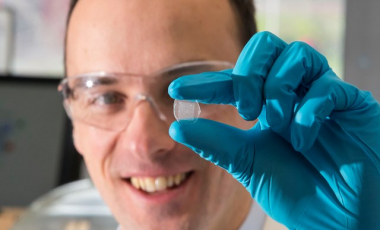