Florian Scheibein, Research Assistant and PhD scholar in the School of Health Sciences at Waterford Institute of Technology (WIT) has been awarded The Council of Europe’s International Co-operation Group on Drugs and Addictions (Pompidou Group) European Drug Prevention Prize at the group’s 50th Anniversary in Paris, France on October 28th 2021.

This prestigious prize was awarded to Florian and Jan Stola (Youth Organisations for Drug Action) for their role in the development of a harm reduction mobile application called TripApp, which connects young people who use drugs to a range of support services, including a map of harm reduction services across Europe and drug alerts.

The Pompidou Group believes that meaningful youth participation improves the chances of successful drug prevention for reducing drug-related harm and creating healthier citizens and communities across Europe. Since its launch in 2004, the European Drug Prevention Prize has been awarded every two years to innovative projects led by young people for young people. This year marked the 10th edition of the prize, which recognises outstanding drug prevention projects that involve young people in the development, implementation and decision-making processes.

Speaking of the significance of the project and award, Florian said, “TripApp provides a growing international map of drugs and sexual health services which enables young people who use drugs to access services whether they live in an area, have recently migrated or are travelling as a tourist. TripApp also engages young people with available laboratory drug analysis data which shows them when analysed ‘ecstasy’ pills have been adulterated/contaminated, are dangerously strong or when they are unexpectedly a more dangerous substance. This is a data-driven prevention strategy based on the concept that credible evidence of short-term harm will reduce and prevent drug-related harms. It is an honour to receive this award for TripApp, an important project that offers support to young people to reduce and prevent harm associated with the use of psychoactive substances. We hope to build on this work through future European funded projects led by the School of Health Sciences.”

The app was originally produced as part of an ERASMUS+ funded project through a partnership between Youth Organisations for Drug Action, the Nightlife Empowerment and Wellbeing Network, and Help Not Harm, an Irish NGO in which Florian was the Deputy Director. The original technical development was undertaken by National University of Ireland Galway’s Insight Centre for Data Analytics. The app was further developed by Energy Control, a Spanish NGO that runs a drug checking program and range of other drug services.

In recent years, Florian has helped manage the project through his involvement with Youth RISE, an NGO that works with young people who use drugs, with the support of grants from the Robert Carr Fund and The Global Fund to Fight HIV, Malaria and TB. This has included making the platform available in a range of non-European languages including Urdu, Hindi, Nepali and Swahili. The platform is being made available in over 20 languages.

Congratulating Florian, Prof John Wells, Dean of the School of Health Sciences at WIT said, ‘This award demonstrates significant international recognition of the world-class standard and social impact of Florian’s work. We commend Florian on this amazing achievement.”

Florian is currently in discussions to increase the geographic coverage of the app with drug service networks globally, and is working to remove any barriers to sharing this data with international bodies.

Florian was recently interviewed by Radio Kerry about his work on TripApp and the Pompidou Group European Drug Prevention Prize. You can listen to the full interview now. 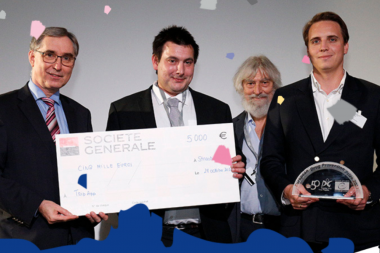