Bachelor of Business (Hons) with French graduate Lisa McGrath has gone on to be employed as Jameson Whiskeys International Brand Ambassador since completing her education at Waterford Institute of Technology (WIT). Currently living in Nantes in the West of France, Lisa thanks a number of WIT related factors for helping her fall into her current role.

Lisa first came in contact with the Jameson Graduate Programme at a careers open day in September 2015 having been made aware of the day by Head of Careers at WIT, Angela Collins. While Lisa was still a secondary school student, she made an appointment to meet with Angela and discuss her options.

“As I was studying French as part of my Leaving Certificate, Angela encouraged me to continue with the language at third level and explained the opportunities and the benefits having a second language would have for my career progression after college. After doing some research into the course, it was clear that it is an incredibly comprehensive and fulfilling course. I would say that the School of Business at WIT is one of the best in the country.”

As part of her Business degree, Lisa was given the opportunity to study abroad on Erasmus for a six month period or take part in work placement in Ireland. “I chose to do an Erasmus instead of doing placement in my third year during the flexible semester which I could not recommend highly enough. I did my Erasmus in Montpellier in the south of France and I think that this experience has really stood to me. I am confident that the fact that I had already lived in France really aided my application for the Jameson graduate programme and is definitely one of the contributing factors to my obtainment of this role.”

Originally from Waterford, it was a no brainer for Lisa to study at WIT, although this view was not shared by all her peers, “One piece of advice that I cannot stress enough is to pick a course based on your interest in the course itself and not solely based on the location. I have so many friends who were adamant that they wanted to do a course in Dublin, simply because it was in Dublin. Many of these friends have changed course or dropped out of college altogether.”

As a student of WIT, Lisa was honoured with the John Hume Scholarship which is an annual scholarship awarded to a student of the Business School at WIT. The recipient of the award is based on a competitive interview and grades.

“Each time I went for a job I was asked about the John Hume Scholarship as it was something that stood out on my CV. For me, the biggest accomplishment and benefit I have gained from the John Hume Scholarship has been my work as a Jameson Brand Ambassador. It really set me apart from the crowd and I strongly believe it was a huge contributing factor to my attainment of this role.”

Looking to the future, Lisa hopes to find a career in economics and is considering further education once she completes her time with Jameson, “for now, I hope to continue to receive international experience and gain insights into different areas of business by working in foreign countries with such a huge and greatly established brand such as Jameson.” 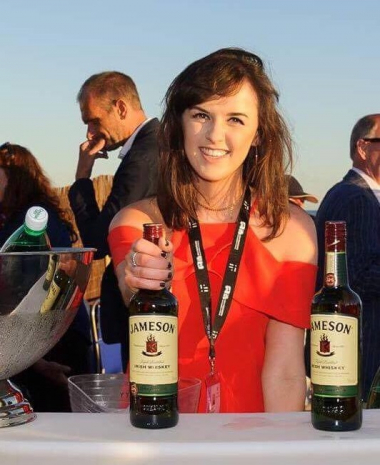