The Undergraduate Awards (UA) gathered 150 of the world’s top undergraduate students in Dublin for the 2016 UA Global Summit, including one student from Waterford Institute of Technology (WIT).

Cited as the ultimate champion of high-potential undergraduates, and often referred to as a “junior Nobel Prize”, The Undergraduate Awards is the world’s largest international academic awards programme, recognising excellent research and original work across the sciences, humanities, business and creative arts.

The winning student from WIT was Katie Duggan in the category of Social Sciences: Social Policy for her work assessing the value and limitations of Irish policy, legislation and practice from a children's rights perspective. Katie was named as the Regional Winner for the Island of Ireland.

Katie, who hopes to be a primary school teacher in the future said, “I was delighted to be both highly commended and a regional winner this year as being a regional winner meant that I was able to attend the UA Global Summit in Dublin. I was highly commended last year but couldn't obtain the funding to attend the summit and I thought that I had missed my chance. To be recognised by UA for the second year in a row and in two categories this time also felt amazing.”

The Undergraduate Awards received a record number of submissions in the 2016 programme, totaling a massive 5,514 papers from undergraduates in 244 institutions and 121 nationalities. In each category, the Global Winner is the highest-performing paper overall and also within each category the Regional Winner is the highest performing Highly Commended paper from their region. Highly Commended Entrants are those who were ranked in the top 10% of submissions in each category.

The students received their medals and certificates at the UA Global Summit and were addressed by keynote speaker Dr. Mae Jemison, NASA Astronaut. Pertinent to last week, Dr. Jemison addressed the students saying “Yikes. What have we been doing? We look at what's been happening in the world, and people say things will just turn out... Good things just don't happen, things don't always turn out, they require work. As our future industry-leaders and CEOs, we are counting on you.”

Speaking about this year’s Winners and Highly Commended Entrants, CEO of The Undergraduate Awards Louise Hodgson said “This is a huge achievement for Waterford Institute of Technology and its students. UA received the highest number of submissions to date with only the best papers making it through the judging process -  the competition was extremely tough and the Judges were astounded at the high quality of undergraduate research in the programme this year. Congratulations to this year’s successful entrants”. 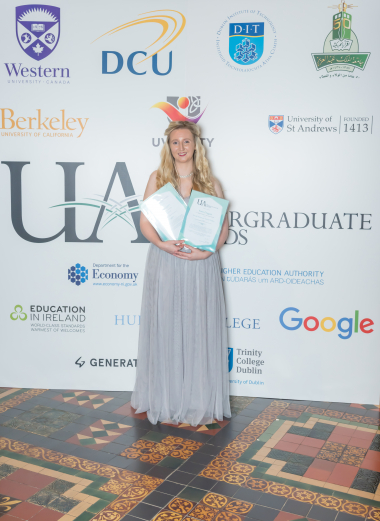