Mairead Daly is a sports scholarship student at WIT and was recognised as Offaly’s Ladies Footballer of the Decade.

Fourth year Bachelor of Business in Recreation & Sport Management student Mairead was presented with a glass plaque by Offaly’s Sports Partnership to acknowledge her as being Offaly’s Ladies Footballer of the Decade on Saturday 3 December.

Once Mairead completes her degree at WIT she wishes to pursue a career in teaching or sports development.

“WIT has helped me greatly in relation to balancing my academic work and my sports within the college. In particular, the sports scholarship as it offers nutritional advice, training programmes and academic support such as grinds. The lecturers and classmates in my department are also extremely friendly and helpful, so that makes my course even more enjoyable,” Mairead said about the sports scholarship she receives from WIT,” Mairead said, when discussing WIT.

Having recently returned to playing football having suffered from a broken collarbone, Mairead trains regularly at the WIT Arena and is looking forward to using the gym facilities there.

Following the recognition, Mairead said, “It's an honour to be nominated for an award of this caliber, never mind winning it. There are so many great footballers in Offaly who deserved this award so I consider myself lucky to have been chosen. I've been playing football since I could walk, so it's hard to put into words what this means to me. Honestly, I'm extremely grateful and I couldn't be happier to have been picked as Offaly's Ladies Footballer of the Decade, I'll enjoy it for years to come.”

WIT sports scholarship bursaries are offered as well as placing a strong emphasis on academic support to students along with personal and sporting development. Workshops are provided in the area of mental health, cooking, sport psychology and nutrition while medical and physiotherapy support is provided to the students. Other sports scholarship students include, GAA Scholarships 2016 Senior Hurling Player of the Year Austin Gleeson, Camogie Player of the Year Denise Gaule, and Meighan Farrell and Julianne Malone who also received All Star Camogie awards for 2016. 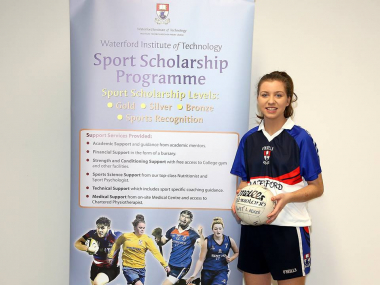