Waterford man and WIT graduate from the BBS programme, Mick O’Meara will be 50 in August and before he made another important milestone – he completed the fastest unsupported solo circumnavigation of Ireland. He left Garrarus beach in Co. Waterford at 10am on Thursday 11th of June and returned on Friday 3rd of July, 23 days later. Battling wind and rain O’Meara paddled through unseasonably rough seas in his effort to take and break the record time.

In 2011 Jeff Allen and Harry Whelan circumnavigated Ireland in 25 days in a supported expedition, O’Meara was attempting not to match this but to beat it and make his the fastest time ever. Unlike Allen and Whelan, O’Meara carried all his own gear, pitched his own tent and cooked his own food each night. Entirely self-sufficient, he relied on food parcels sent from Waterford to various points in the country. He had a meal or two and slept in two beds on his journey but for the rest of the time he fended for himself, paddling up to ten hours a day and sometimes getting up at 3am to make up time lost to bad weather or to catch the tide around a particularly tricky stretch of water. He saw a mini tornado, basking sharks, dolphins and a lot of rain and windy weather!

In 2010 Mick with his good friend Brian Fanning broke the record for the fastest time to kayak across the Irish Sea from Co. Wexford to White Sands Bay in Wales in 9 hours and 38 minutes raising over €11,000 for cancer charity the Solas Centre in Waterford city. Mick’s other kayaking achievements include:

News spread of O’Meara’s trip round Ireland among paddlers throughout the country and he was met on the beach up in Portballintrae by a group of local kayakers who had been following his progress and were waiting to do what they could to help him that evening. He completed his journey on the evening of Friday 8th of July, a full two days faster than the previous record. Mick later posted in his blog "Got home to a great welcome this evening. Great to be back and too tired to write about it. I'll tell all tomorrow....."

Find more about Mick at www.seapaddling.com , follow his blog and see his progress on the map. 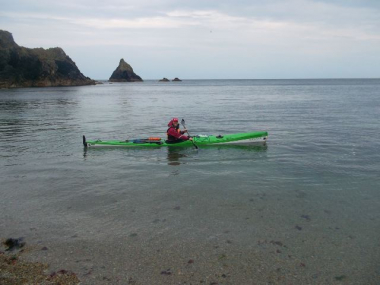