Ciaran won the award, sponsored by TG4 and Foras na Gaeilge, for his show ‘Ceol ón gCroí’. The documentary focused on Irish composer and musician Charlie Lennon and where he drew the inspiration for his music. Ciaran was Producer, Editor and Camera 1 on the production, Micheál Ó Slaighearta from Connemara was Director and Tomás Ó Riada also from Connemara was Camera 2.

Ciaran is from Connemara in Galway and is a student on the Higher Diploma in Television Production (Ard Diploma i Léiriúcháin). The exciting postgraduate programme is taught entirely through Irish and is a collaboration between Nemeton TV in An Rinn and WIT.

The Smedias, the KBC National Student Media Awards, are organised by Oxygen.ie and sponsored by KBC Bank Ireland. This year the awards received over 1,000 entries from student journalists, broadcasters and producers from all across Ireland.

If you are interested in learning about TV production, visit www.wit.ie/wd551. 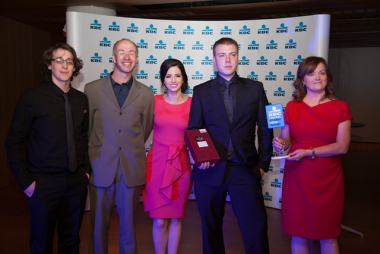