WIT students attend seminar at the Royal Institute of Architects

Former Minister of State and current Dublin City Councillor, Ciarán Cuffe, spoke with great energy and passion about his background in architecture and how it had influenced his political career, particularly in the campaign to improve the quality of shared public space. Students who had traveled to Dublin for the meeting were given a preview of the new proposals for the pedestrianisation of College Green, a project which will transform the area directly in front of Trinity College into Dublin's most important civic space.

He also revealed how he had been given his start in architecture by the second of the afternoon's speakers, Seán O'Laoire of Murray O'Laoire Architects.

Seán used the occasion to reflect on some of the projects he has been involved in in a long and distinguished career.  His insights into the design of such iconic structures as Thomond Park, the GMIT library and the CIT School of Music served as a reminder of the huge impact that Murray O'Laoire has had on the built environment in this country in the past thirty years. He also shared images of his favourite project, the Holy Faith Spirituality Centre in Glasnevin, an extraordinary building which has received little public attention but which is arguably Murray O'Laoire's most impressive work to date.

The meeting had a surprise visit from outgoing Royal Institute of Architects Ireland (RIAI) President Robin Mandal who extended an enthusiastic welcome to the WIT students and graduates. This set the stage for an impressive series of presentations from current students Hubert Grabczak, Wojcek Cymerys, Wai Jian Choong, Tayo Iso Daniels and Anthony Hogan.

WIT AAA president Tadhg Casey was delighted with the success of the seminar, "The purpose of events like these is to strengthen the department and get the word out about the quality of our graduates," said Tadhg.

WIT AAA has a string of events lined up for the autumn season starting with a meeting of current and former students due to take place in France in September and a 'VR as design tool' initiative to get underway before the end of the year. 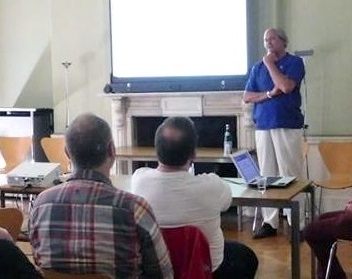