WIT students called up to Colleges and Universities national team

Business student Darryl Walsh, from Portlaw in Waterford and Recreation & Sport Management student Paul Martin, from Paulstown in Kilkenny are part of the 18-man squad who travelled to France to play a friendly in Bordeaux on Tuesday 21 May.

Unfortunately, Ireland were beaten 1-0 in Bordeaux. This friendly was organised in preparations for the 2019 Summer Universiade (an international university sports and cultural event). Ireland’s Head Coach Greg Yelverton will be naming his 20-man squad that will travel to Naples for the tournament in July. Team Ireland were drawn in Pool A alongside South Korea and Uruguay.

Darryl, a defender, has played underage football for Tramore AFC before moving to Waterford FC u17 before making his senior debut for Waterford FC in 2017. Darryl is currently a Gold/Waterford FC Scholarship student in WIT.

Paul, a keeper, has previously played with St Patrick’s Athletic and Dublin side Belvedere before moving to Waterford FC u19 in 2017. Both players have been capped at underage by the Republic of Ireland.

Both Paul and Darryl were part of the WIT premier team who won 2019 Rustlers CFAI Perpetual Cup Final back in March, the last time WIT won this cup was back in 1999. The Men’s soccer team also won Team of the year at the Vikings Sport & WIT Societies Awards night for their remarkable campaign. 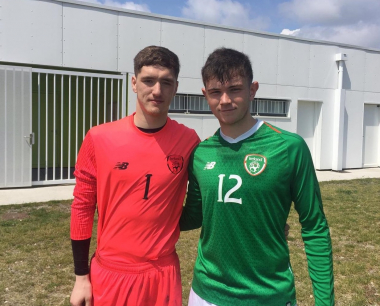