Marketing students at WIT created a marketing plan that will assist New Ross becoming more attractive from a tourism, business and residential aspect

A marketing plan for New Ross was unveiled by WIT students at a presentation in the Dunbrody Visitor Centre on Tuesday night.

The five students won a competition ran by New Ross & District Chamber of Commerce for their well-researched marketing and advertising plan for the town.

New Ross and District Chamber approached the 3rd year class of BA Marketing with Advertising and Online Media in an effort to utilise their marketing skills and to seek their advice in helping to improve New Ross from a tourism, business and residential aspect, from an outsider's perspective.

As there were only two members of the group familiar with New Ross and the surrounding areas prior to this project, the group felt that it was necessary to carry out primary research, as well as secondary research to get a good understanding and feel for the area.

Their 'Visit • Work • Belong' slogan formed the basis for the campaign theme.

The authors believe this slogan will capture all the aspects of what the town has to offer, generating an emotional response in return. They considered the relevant media channels that would be necessary for the campaign and developed a media plan consisting of various media objectives, a media strategy and media tactics.

The group focused on making New Ross into a destination town, highlighting the need to connect with the American community from a tourism perspective and to encourage people while they are visiting New Ross, to stay in the town and to spend money. They also created a Visit New Ross logo, of a boat with purple and gold sails.

Chamber CEO Teresa Delaney said: 'Their project is very impressive. There are a lot of ideas which we, in the chamber, will be working on going forward.'

After the students' presentation New Ross District Director Eamonn Hore spoke about all of the projects going on in the town presently.

Mr Hore said businesses and the community in New Ross must capitalise on the changes which will be brought by the bypass.

He said New Ross Municipal District are hoping to develop the old New Ross Courthouse for their offices and to develop the grainstore as an enterprise centre, with linkages to Waterford Institute of Technology. He also spoke about plans to develop advance factories in Butlersland industrial park.

This article originally featured in the New Ross Standard. 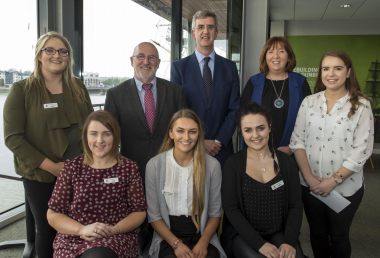